Renowned economist Stephen King shares his views on how the world will address financial and economic challenges created by the pandemic.

The COVID-19 pandemic has not only delivered the most serious public health emergency in a century, it has also created economic risks that will likely persist for years after the virus is under the control. Lockdowns, closed borders, and other social distancing measures take an immediate toll on the economy, while borrowing to fund fiscal spending that helps alleviate these short-term problems will likely leave a long-term overhang on the more indebted countries.

The issue is even more acute for many emerging markets, which were already in a precarious situation before the pandemic struck. The way in which these problems will play out in this diverse range of countries, once hailed collectively as the future of global growth, was the subject of a far-reaching discussion with HSBC Senior Economic Advisor, Stephen King. Speaking during HSBC’s Global Emerging Markets Forum, he shared his views on the diverse range of economic and financial challenges that will likely remain after COVID-19.

The need for deep pockets

Many countries that imposed lockdowns will face huge pressure from a fiscal perspective, as sharp deficits due to subdued economic activity translate into increased government debt. Mr. King said that the rapid rise in spending and borrowing is akin to a situation where a country goes to war.

“When this happens, the most important thing is how deep a country’s financial pockets are,” he said. “Some countries can get away with it, especially those where there is widespread trust in their fiscal and monetary institutions. This is not so true for countries with a history of hyperinflation, currency crises, or balance of payments problems.”

Central bankers are also constrained by the fact that traditional monetary policy techniques are not as powerful as they used to be, putting more pressure on fiscal measures to address economic problems. There is a school of thought that countries can simply print money to meet their spending requirements. “This is fine up until the point where you print into an inflationary constraint, and even knowing where the tipping point is can be difficult.”

Looking to the future, he said, we could be entering a prolonged period where we have a two-tier economy, with countries that have both maintained financial stability and successfully tackled the pandemic significantly outperforming countries that have been less success.

Another aspect of the economic impact of the pandemic is that it has demonstrated how fragile global supply chains are, said Mr. King. There is a corresponding change in language among governments across the world towards national champions and strategic industries. Producing more goods domestically is also an idea that is gaining traction.

All of this, he said, is a blow to the process of globalisation that changed the world over the last 40 years. From a manufacturing lens, changes in technology could make it just as cheap to manufacture locally, as it is in a country with a cheaper labour force. And from a financial point of view, the movement of capital could also become less fluid, with some emerging markets finding it harder to attract funds, while those that already have reserves might introduce controls to stop it from leaking out.

The other political challenge going forward will be how US relations with key emerging markets play out after a new administration is installed. Speaking weeks before the US presidential election Mr. King said it would be unlikely if a Joe Biden presidency would remove tensions between Washington and Beijing. The risk for a number of of emerging markets is getting stuck between two world’s two largest economies.

“If you’re a country that is politically aligned with the US, but economically dependent on China, what do you do? Do you have to make a choice?” he asked.

Towards the end of the discussion, Mr. King addressed several big picture topics. On the future emerging markets, he asked whether there will be countries that never develop. After all, there are not that many countries that have reached a level of development that matches the advanced economies. And the ones that have, are all in Asia – Japan, Hong Kong, Singapore, South Korea. All of these countries had land reform that split up holdings broadly among the population. One theory suggests that mass ownership of land encouraged entrepreneurship, which in turn resulted in people becoming better farmers.

The final topic he talked about was the timing of the next recession. Although there has been a collapse in economic activity due to lockdowns and continued uncertainty over COVID-19, he said that there were no financial imbalances that might act as a prelude to a recession. More likely, is that there could a long soft recovery, as pandemic-induced economic stress leads to bad debt in the banking system, discouraging lenders from expanding credit quickly.

“In this situation, you would get a V-shaped rebound as lockdowns are lifted, but after that, financial constraints will kick in that will make it more difficult to grow in the future,” he said. 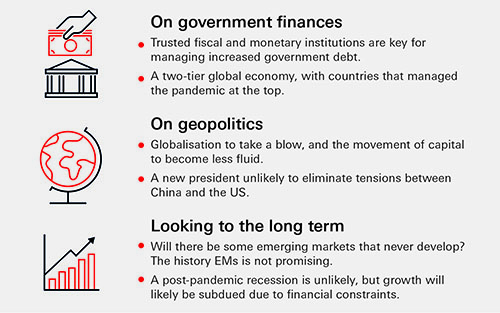