As the financial community better understands the value of nature’s riches, biodiversity will become a mainstream part of the sustainability conversation. 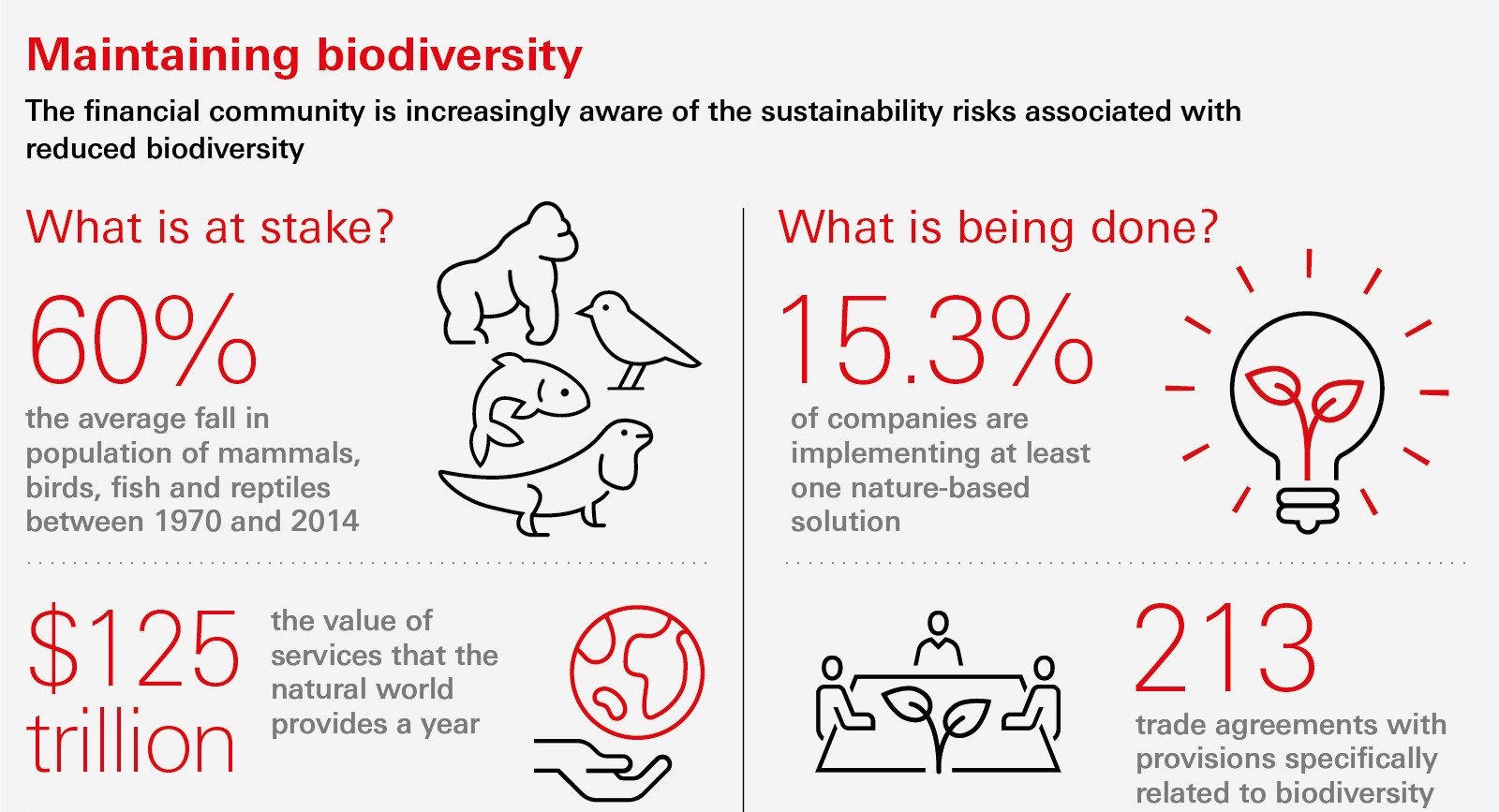 When investors think about the environment, they tend to focus on climate change. We can see this in the intense scrutiny in carbon emissions, and whether companies are major polluters, or if they are vulnerable to changes in the climate – such as rising sea levels or extreme weather events. As the sustainability theme matures, the financial community is taking a more holistic approach to the natural world, which is pushing biodiversity high up the sustainability agenda.

Put simply, biodiversity is the variety of life on the Earth – covering everything from the smallest bacteria to the largest mammals. The natural world is a complex system that has developed over millions of years: every kind of animal or plant has a role to play, and by interacting with each other, is able to sustain life on the planet. The more diversity there is within an ecosystem, the more sustainable it is.

Human activity is taking a toll on the biosphere at an alarming rate, which could lead to an ecological crisis that compares with climate change in terms of severity. The World Wildlife Fund reports that the population of mammal, birds, fish and reptiles has fallen on average by 60 per cent between 1970 and 20141.

“Unsustainable land use and desertification are resulting in habitat loss for many species,” said Ashim Paun, Director of ESG Research, Climate Change Strategist, at HSBC.

The costs of inaction

Even though the financial industry is increasingly aware of issues related to biodiversity, the challenge going forward is that there are no established metrics to measure the impact of economic activity. In this sense, biodiversity is lagging other areas of sustainability.

“In climate change, we have an accepted set of data points that help us understand the challenge. We can measure emissions from a ton of coal, the cost of producing the energy in a different manner, and the downside costs of not making that transition. We do not yet have similar tools with biodiversity, making it hard to measure and price the changes that are taking place.” said Mr Paun.

Although there are no standard disclosures from companies on biodiversity, like there is on carbon emissions, there are some headline numbers that highlight the potential costs of biodiversity loss.

The WWF for example, values the services that the natural world provides at around USD125 trillion a year – including food, energy, and medicines2. The European Commission says that the world lost an estimated EUR3.5 trillion to EUR18.5 trillion per year in ecosystem services from 1997 to 20113. There are also costs associated from one-off events. A more uniform biosphere increases the likelihood of the transmission of diseases from species to species, resulting in deadly pandemics. The World Economic Forum in October 2020 said that the response to the COVID-19 pandemic has already cost USD11 trillion4.

In balance with nature

Data on corporate impact on biodiversity might not be as available at it is for climate change, but that does not mean nothing is being done about the damage to the natural world. At a corporate level, there are a growing number of companies engaged in nature-based solutions (NbS). These tend to focus on forestry-related activities – such as forest management and conservation.

A survey of 543 companies conducted by CDP Global found that 15.5 per cent companies are implementing at least one NbS. Asia was the leading region, with nearly quarter of respondents having a NbS in place5. When it came to sectors, the materials industry was the most likely to have a NbS, with 37 per cent of the total. Mining companies were replanting native species near mining sites and timber companies promoted conservation by avoiding woodland areas with protected status.

Beyond corporations, governments are also working to better protect the natural world via international trade deals, bringing together a longstanding connection between trade policy and the environment. “There has long been a question around whether trade liberalisation may lead to greater environmental degradation,” said Shanella Rajanayagam, a HSBC Trade Economist.

Pursuing sustainability goals via the World Trade Organization (WTO) can be difficult for its members, as there is no single international trade agreement at the WTO that deals exclusively with environmental issues. Member states can however apply trade-related measures to protect the environment as long as they do not unduly restrict trade and are non-discriminatory. These include legitimate biosecurity restrictions and import checks to contain the spread of pests and diseases.

That said, there are around 630 trade agreements that include environmental provisions, with 213 containing provisions that specifically relate to biodiversity6. These vary in scope and effectiveness. The most common provisions relate to protecting the seas and oceans, along with the conservation of fishery resources. The protection of forests, parklands and other natural reserves also appear in a significant number of trade agreements.

With both governments and companies already working hard to preserve nature’s wealth, it will only be a matter of time before the financial industry broadens its environmental metrics to incorporate biodiversity. As this happens, the variety of life on earth will become a mainstream part of the sustainability conversation for investors. Financial professionals with an interest in ESG should therefore expect biodiversity to climb the agenda in the coming years.

View Next
The UAE’s strong sustainability commitment strengthens the build back
HSBC’s survey of capital markets issuers and investors in the UAE uncovers a growing awareness, and commitment, to environmental and social considerations.
In Depth
Join the conversation?