As first seen in Bonds & Loan, Mexican borrowers are gradually adjusting to the new market environment that has emerged since the inauguration of Andrés Manuel López Obrador, and amid broader emerging market volatility driven by the rise in global interest rates. Nevertheless, CFOs at a Breakfast Roundtable hosted by HSBC and Bonds & Loans in Mexico in February have raised important questions about some of the new administration's policy decisions, highlighting the need for clear, consistent and transparent decision-making as essential in their bid to secure stronger growth and investment.

Despite some challenges, participants saw 2018 as a moderately successful year, with the new budget in December seen as robust and fiscally responsible. Many issuers over the past 12 months have switched to "wait and see" when it comes to the new leadership, before committing any additional capex (although there has been some variation and divergence in that regard between different sectors).

While the energy sector, for example, continues to struggle due to a confluence of factors, industries such as telecoms infrastructure are already reaping benefits of the government's commitment to expanding internet coverage and connectivity to the farthest reaches of the country, including through private investment.

External and geopolitical challenges – namely the new USMCA deal and US-China trade wars – have lingered into 2019, albeit in a less acute form than seen in the previous year. Exports have formed a crucial part of Mexico's growth story in recent years, and finalising the "new NAFTA" is still seen as a major achievement.

For the automotive and manufacturing sectors, for instance, the new deal largely maintains the status quo, which is positive considering the tense and aggressive rhetoric prior to the renegotiations. Increase in regional value content should also prove beneficial to Mexico, and should see a rise in onshore development, especially from Asian and European manufacturers. The 16 dollar-per-hour rule (the agreement calls for 40-45 per cent of automobile components to be made by workers who earn at least USD16 an hour by 2023) was less welcome, but a five-year phase-in period should provide sufficient time to readjust.

But although the substance of new policies has been largely welcomed (or at least tolerated), a few CFOs expressed reservations about the way they are being implemented, with the debacle following the cancellation of the New Mexico City Airport featuring prominently in the discussion. This inevitably led to some concerns being expressed about the future of some of the other projects in development.

Still, CFOs were encouraged about the new finance ministry's willingness to engage with other market players and react appropriately to their feedback; that assessment referred to the Hacienda's low and mid-level officials, executives and civil servants, while some of the top-level administration officials were deemed less engaging – at least so far. As some of the key positions in the finance ministry continue to be filled going into 2019, the responsiveness and steadfastness of those departments is expected to improve.

Views of the roundtable participants largely reflected some of the feedback from the semi-annual 3Q 2018 Bonds & Loans Market Insights CFO & Investor Survey Report. In particular, the Mexico-specific survey results showed less concern about external risks (9.09 per cent of CFOs) compared to the broad LatAm average seen in the same survey (20 per cent), with internal and external challenges weighing equally heavily on Mexican company chiefs' minds (54.6 per cent) than across the continent (40 per cent).

Among the broad macro and political risks CFOs at the roundtable were anticipating in 2019, the most frequently referenced was state-owned oil giant Pemex, which is sitting atop a USD106 billion debt pile.

While not all industries would be equally impacted by Pemex's challenges, a possible negative credit event and growing pressure on the country's fiscus could cascade across the borrower universe by influencing broad investor sentiment in a way that could negatively affect credit market performance, as well as on economic growth and consumption.

With uncertainty remaining over NAFTA and global trade, along with internal issues like the sustainability of Pemex's balance sheet, CFOs in the country are already preparing for another challenging and important year, which may very well set the tone for the domestic and global market outlook for the next decade. Some of these concerns were tied to developments and dislocations seen around the world, such as the election of populist leaders in the developed world, Brexit, and other anti-globalist trends.

Seeing Mexico and the country's challenges as part of a global trend – rather than a black sheep among peers – means that investors have compatible "country" risks to weigh up when picking a destination for investment. Therefore, managing the increase of idiosyncratic country risk – including headline risk – becomes a primary objective for CFOs and treasurers intent on drawing strong appetite for their companies' credit.

The flipside of this is that companies that are able to extend their presence beyond the country's borders and diversify to regionally or globally will have a better credit outlook and can hedge their risks. "It's all about finding the perfect balance between representing the Mexican market and minimising the exposure to the country risk," one CFO explained.

Refinancing, deleveraging and locking in longer-term debt – trends that were already becoming apparent in the second half of 2018 – continues to be the dominant theme for Mexican borrowers. Some have hit their funding targets early – in 2016, or start of 2017 – to get ahead of the elections; and some decided to sit out the election noise, and are now trying to assess market conditions for refinancing.

From the investor perspective, the trend to maintain strong liquidity and minimise risks will likely continue through a tricky 2019, when the new administration will be settling into power. In terms of issuance volume, 2018 saw a moderate drop of about 15 per cent from 2017.

Corporate issuance was, however, "top heavy" last year, with most deals completed in 1H2018, followed by a slow H2. While investors have ample liquidity to deploy, they are more defensive and reluctant to extend tenors under current conditions, stemming from concerns about inflation and rising rates – even when it comes to USD-denominated issues.

CFOs reasons for not coming to market in 3Q2018 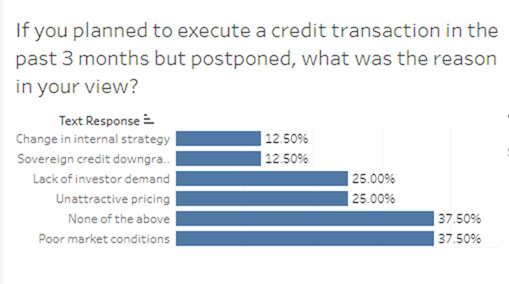 The main questions, then, are around the supply side – corporates have to decide whether to come to market now or hold out and refinance. There is a formidable maturity wall in 2021, which is likely to coincide with the impact of the government's fiscal reforms, adding some urgency for corporates to refinance over the next 12-18 months.

But pricing remains the main variable: over the past six months, the cost of borrowing has risen dramatically, both locally and internationally.

End of Hiking Cycle in Sight?

There has been some reprieve for Mexican assets, along with broader EM, since the Fed signalled at the end of December last year that it may pause or even end the hiking cycle, but market-watchers are weary that this sort of sudden boost will also bring bouts of volatility, creating a danger of sudden outflows were the Fed to reverse direction again.

Relative value then has become a key factor for investors. For example, recent issues by Credito Real and by the Mexican sovereign saw a fairly high premium: Mexico's USD2 billion April 2029 notes priced at +185bp over US Treasuries, coming wider than Colombia (165bp) and Uruguay (which arrived the same week – with a longer bond rated two notches below), and far wider than Peru's, which came in at 86bp wide of the UST curve. From the issuers' perspective, it is increasingly a market of windows, which means that astute timing and swift execution are essential in getting the best deal.

Some CFOs conceded that in this environment, they are much more comfortable going into the loan market than issuing bonds: at a time of rising rates and uncertainty, relationship banks are able to offer better prices than bond investors, which tend to focus more on the macro conditions among a range of other exogenous factors when pricing transactions. The traditional pre-conditions associated with the bond markets include a large issuance size, a convincing use of proceeds etc, which means that borrowers are preferring syndicated loans – typically, with their relationship banks.

The caveat here is that this trend has a propensity for reversing very quickly, as the 2008-09 financial crisis demonstrated: when push comes to shove, credit officers can close the bank market doors very swiftly, often even faster than a window in the bond market. What this means is that while a loan is still a safer route in times of volatility, hedging your bets by keeping both avenues open – wherever possible – is the most sensible solution.

"After all, the USD4 billion bond earlier this year can be considered a success, even though the price paid was wider than other comparable credits. That is just the reality at the moment," Yamur Munoz concluded.

Going into 2019, roundtable participants generally expect growth to remain subdued in 2019. Many of the banks have priced in a slowdown in 2019, but other key variables – namely the FX and interest rates – are becoming increasingly harder to predict. Black swans aside, there will be at least two major developments in 2019 that will weigh on Mexico's growth. The first is the NAFTA revamp, the USMCA, which still has hurdles in each countries' legislative branches. The second is the US economy.

"We are now seeing the US recession talk turning into slowdown talk, which is positive. And the progress in tariff discussions with China is also encouraging," said one participant.

Mexico can reap some rewards out of a US-China standoff. It has long-term competitive fundamentals and can better service the US market, which ought to help draw in investors that have been sidelined by the tariff wars. Some production is already switching from China into Mexico – a trend that is likely to continue into 2019.

In terms of policy expectations, the government sticking to the budget and resisting the urge to introduce additional taxes, while being responsive to the Fed's movements, are the main objectives for 2019 from a market perspective.

On the budget side, more clarity is needed regarding the primary deficit goals. So far, figures have been somewhat uncertain.

Policy-makers also need to come up with a solution to the growing issue of labour protests and strikes, which occurred recently in the "maquila" factories in Matamoros and are threatening to spill-over into other regions. This kind of social unrest has the potential to hamper the reform agenda and stifle economic growth, and needs to be addressed quickly.

The energy and fuel sector remains the elephant in the room – particularly the case of Pemex. International banks for now are bullish about Mexico's medium and long-term projects, although those with large exposure to Pemex are growing jittery as its wall of maturities approaches. The company will need to refinance them soon, which means government support in some form or another will be essential.

The bigger challenge, for the company and for this administration, is to streamline and reform Pemex to make it a more attractive credit for global investors – and not just those already exposed to it.

Pemex today is a company that is too big to fail, but too bulky to fully succeed. But the government has some time to introduce structural changes to streamline and deleverage the oil giant, resolve some of its long-standing inefficiencies and secure its future.