Read the second issue of our Rethinking Treasury series

This article is part of the New Future series.

Over the last decade, financial markets have entered unexplored territories. Currency volatility, emerging market uncertainty, central bank policies, digitalisation and regulation have created an unprecedented environment where measuring, monitoring and mastering risks has become more critical, but perhaps more perplexing than ever for companies/treasurers. Could science help us understand how and why we make decisions when it comes to managing risks?

1. Understanding the science behind "regret"

Treasury risk management can be approached in many different ways. But one thing is certain – however sophisticated the systems, decisions will have to be made or endorsed by humans.

No matter how well educated we might be, our decision-making is still shaped by some emotional drivers with long evolutionary roots. A prime example being the emotion of "regret" which has a powerful impact on how hedging is actually carried out.

We can harness the insights of behavioural scientists on "regret" to improve our decision-making. Let's consider the cases of Paul and Georgei:

No matter how well educated we might be, our decision making is still shaped by some emotional drivers with long evolutionary roots. One prime example of such would be the emotion of "regrets" which have a powerful impact on how hedging is actually done

Who feels greater regret? According to the study, the results are clear-cut: only 8 per cent of respondents say Paul, and 92 per cent say George.

The breakdown of answers can seem surprising if we consider that the situations of the two investors are objectively identical: they both now own stock A and both would have been better off by the same amount if they owned stock B. The only difference is that George got to where he is by acting, whereas Paul got to the same place by staying put.

Therefore, the key to understanding regret is not simply determined by the outcome of the decision, but also by whether one has deviated from the "default".

Regret avoidance is a powerful emotional driver of behaviour and this is also true of decision making in risk management.

Managers tend to have a powerful urge to stick to the "default" when evaluating different options. By doing so, they often feel they are making the most "prudent" or "conservative" decision for the firm. It is important to remember that such a belief may not have any objective basis but simply is driven by our emotional satisfaction of regret avoidance.

Our biological make-up also gives rise to a similar bias called the "status quo bias." (We will discuss in more detail in future articles.) Consider how often your colleagues would sit or stand around the same spot in your weekly meetings.

Companies that make decisions largely based on the status quo are as likely to be suboptimal as they are to be rigid. It may be even worse if the default implies "doing nothing". This is a classic example of the principal-agency problem and perhaps explains why many companies often find implementing change difficult.

Regret avoidance is a powerful emotional driver of behaviours and this is also true of treasury risk management. [...] It is important to remember that such belief may not have any objective basis but simply driven by our emotional satisfaction of regret avoidance

3. Turning "regret" to your advantage: redefining the default

The good news is that "regret" can be harnessed with a simple solution: the implementation of a formal treasury policy. A treasury policy dictates the modus operandi, and therefore redefines the "default" for various scenarios and can help prevent decision-makers from a pre-conditioned "do nothing" mantra.

Instead of fighting what is a core human trait, a treasury policy could harness our "regret avoidance" and lead to a good adherence to some methodical guidance.

Treasury policy can be highly flexible, as it can be tailored to the company's specific needs. However, "doing nothing" must not be framed as the default option. Once a healthy amount of hedging is deemed as the default, decision-makers, who do the right thing by acting to hedge to reduce the firm's risk, would not bear the emotional burden of the possibility of feeling regret.

Given the complexities of treasury risk management, HSBC Thought Leadership has put together a dedicated team of experts to help corporates optimise their strategy.

Next month, we will explore how quantitative tools could be a valuable asset to make rational decisions, when it comes to complex risk management decisions. 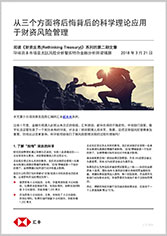