The development of digital economy in cities is leading to an increase of available data. The use of Big Data can contribute to improving the quality of life of the cities inhabitants, by providing solutions in numerous domains (mobility, energy consumption, health etc.) whilst guaranteeing to protect data and the privacy of citizens.

Public data is the basic "raw material" of intelligent cities. Using it correctly can improve citizens’ quality of life.

“The most important point about data is the customer” says Emiliano Doveri, Head of Public Sector Division of SIA.

The "Senseable City Lab" of Massachussets Institute of Technology (MIT) has developed projects where technology is used to anticipate and satisfy the needs of a city's inhabitants. In New York, all taxi journeys in the city are captured and analysed.

The project demonstrated that it was possible to reduce the fleet of vehicles by 40 per cent, while retaining its efficacy. In Seoul, bacterial sensors have been installed in drains, which have made it possible to monitor the health of its inhabitants district by district and to even map out epidemics in real time. These are just a few examples amongst many other applications.

One of the most interesting experiences of organised use within the framework of an Open Data strategy is that of the underground in London. Data is counted in millions. 90 million smart cards, used for travelling, are issued every day.

The use of passenger data by Transport for London (TFL), the public authority in charge of urban transport in Greater London, has achieved several positive results.

Customers have been segmented, which has helped to better understand users and their needs. Traffic management has been improved. Advertising spaces have been better utilised among advertisers by demonstrating which parts of the network benefit from the greatest number of passengers.

Furthermore, passenger traffic data has been made public for  years, in a controlled way, on the TFL website. These statistics are accessible to citizens but also to start-ups who can thereby develop applications that improve the lives of citizens. To do this, you simply need to register yourself in advance on the website. Certain data is not divulged and kept for internal use by TFL, for example, payment related data (for security reasons) or equipment maintenance.

The City Mapper app, created in London in 2011, is a good example of enhancing public data. It lets you calculate the itineraries of urban transport users in real time, combining several modes of transport. It takes into account public transport networks, taxi and private-hires as well as self-service rentals, scooters and bikes. The app currently covers 40 cities across the globe. The example of the London underground shows that raw data does not automatically create value. It is the service and ecosystem built around statistics that makes it possible to enhance data.

“Opening data just for the sake of opening data doesn’t necessary lead to innovation. The data in itself does not necessarily have value. It is what you make of it and the service you create around it. And that is something entrepreneurs do and can do” says Alex Margot-Duclot, Managing Director at PUBLIC France.

The essential question of governance

In terms of Big Data, there is no single blueprint for success. Each city offers a different situation.

Additionally, the situation is continually evolving due to the progress being made by innovation. The use of artificial intelligence, the Internet of Things (IoT) etc. will open up a field of possibilities.

According to the company Strategy Analytics, there are currently 22 billion connected objects in the world: smartphones, speakers, televisions, watches, tablets, computers, etc.1. The number is expected to reach 50 billion by 2030 according to the same source. The amount of data available will increase exponentially.

But in any event, the authorities concerned will be confronted by a central question: that of governance. In London, "the change in governance has changed everything" according to Vernon Everitt, Managing Director, Customers, Communication and Technology for TFL. The creation of Greater London (32 boroughs), gives the mayor full responsibility for the whole transport network, and that of developing a transport strategy. This has led to a new policy in terms of data.

The challenge of cyber-security

The multiplication of data also raises the question of protecting the privacy of citizens.

In the European Union, the General Data Protection Regulation (GDPR), applicable since 25 May 2018, relies on the principle of the advance and explicit consent of the data subjects.

But there is another form of protection that is just as important: that of cyber attacks. In the United States, several cities (Atlanta, Baltimore etc.) have been victims of viruses. In France, small municipalities have been attacked. The impact of these actions can have a devastating effect on networks (electricity, water, payments etc.) the operations of which are disrupted for several days.

When it comes to cyber attacks, a small risk will always exist. However, the experiences of businesses and administrations in tackling this phenomenon shows that solutions exist. There are no fatalities in this domain. The key resides in the anticipation and ability to deploy effective responses. In this area, the key word is resilience.

Cyber-attacks can never be avoided but cities that have anticipated and put in place protective measures can reduce their impact.

Another lesson here is that responsiveness cannot be limited to the managers of the administration concerned. Rather, it’s the whole organisation that must be involved: making people aware and preparing them contributes decisively to putting rapid and effective responses in place. People must be placed at the centre of processes, according to the Hub Institute2. 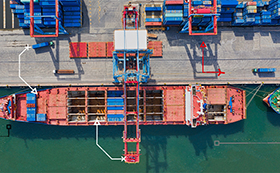