Urban economies are increasingly fuelled by digital technologies that drive the new sector configurations and industries, disrupting and accelerating business. Apart from supporting the emergence of new industries, these technologies are also having an impact on established sectors, disrupting business models and market behaviours. These interconnected themes were discussed by a plenary panel discussion hosted by Andrew Wild Deputy Chief Executive Officer, HSBC France and Head of Commercial Banking, Europe at the bank's Cities of the Future 2019 event.

As digital transformation has become a more prominent part of everyday life, it has come to mean different things to different individuals and businesses. Niall Cameron pointed out that the finance industry tended to see a clear distinction between digitalisation and digital. The former was where you improved your existing business using digital techniques by making everything more functional to enhance the client experience. The latter was instead about examining the new digital economy and gauging how that should shape your business approach, which implied changes in both the organisation and its economic model.

Meanwhile, for Alibaba, digital is simply the entire business. "Since inception we have embraced digital and today we have more than twenty business units all run on a digital platform," explained Selina Yuan. "Critical parts of our implementation of digital are scalability and flexibility, so that we can support huge increases in demand at times such as the 11.11 shopping festival."

Carlos Menendez made the point that digital now effectively was the economy. From Mastercard's perspective, the priority was getting its business and economic models to the point where it could make digitalisation and the digital economy work for all its customers and business partners. In doing so, it was important to appreciate that while technology was obviously critical to this process, the right business model was just as essential.

Carlos also discussed how the economic growth of cities was key to Mastercard's business and supporting this was something best done in partnership with others. An illustration of this was the company's City Possible initiative, which involves a global network of cities, companies and communities working together to promote inclusive and sustainable urban co-development that would help to address pressing urban challenges.

The three primary objectives in this collaboration are:

While the panellists emphasised that technology was not the be all and end all when it came to digital transformation and the emergence of new industries, they nevertheless saw certain technologies and innovative data approaches playing vital roles. In Niall Cameron's opinion, APIs1 were an important example of this. "If you look at how the economy is emerging, partnerships are becoming much more important, so the ability to build partnerships very quickly is also important," he observed. "That means your technology needs to be able to connect internally and externally through APIs."

The huge growth in the volume of data being captured globally is both a technological challenge and major opportunity. According to an estimate from IDC, global data volume will reach 163 zettabytes by 2025, compared with 4.4 zettabytes in 20132. In the digital economy, data is hard currency, but has to be stored and managed in a way that facilitates techniques such as data mining and machine learning that can be used to drive sustainable growth and quality of urban life.

In this context, the panellists felt that cloud computing clearly had an important role to play in terms of both data storage and analysis. Alibaba makes extensive use of it to achieve the necessary flexibility needed to accommodate demand spikes, but also to redeploy capacity efficiently at other times. Apart from benefitting its own business, Alibaba has also made effective use of cloud technology in optimising smart transport solutions for Chinese cities, which have reduced traffic jams in some cases by more than 15 per cent.

In certain respects, technology and data also have an influence on the economic models that will be viable in the future. A common model today is the provision of free apps in return for personal data. However, as data volumes continue to rise and larger personal digital footprints are created, data privacy is becoming a more pressing issue in this regard.

As a result, the question of consent is expected to become a higher priority. At present, a substantial amount of data is effectively being collated and collected without this. The consent model is currently primarily a regulatory adherence issue, but the typical approach of businesses supplying a lengthy list of terms and conditions and a tick box is already looking less viable. This is already under some pressure and as consumers become more sophisticated in their understanding it is likely to be more extensively challenged. As their personal data has economic value, one alternative is for consumers to share in the monetising of that data. This will be particularly significant to smart cities where a large amount of data will be collected on a day-to-day basis.

Another theme examined by the panellists was how existing economic models might be adopted in new business areas. One example of this is the adoption of subscription models in finance for the first time. While this adoption is still in its early stages, there is no practical reason why it would not be more widely applicable for relatively vanilla financial transactions or products.

The panellists also discussed the concept of partnerships as an increasingly important economic model for cities. This could be applicable across private to private, private to public and public to public partnerships. As citizens increasingly demand less friction in their daily lives, a blend of collaborations could help achieve this.

The panel discussion highlighted how interaction across technology, data and business models have the potential to improve cities' economies, but also the quality of life they can offer, with fewer traffic jams and streamlined mass transit being two obvious examples. However, the extent to which these benefits are achieved also depends on a city's interaction with its citizens and business, but also with other cities. In a data-driven knowledge economy, the extent of such interaction could spell the difference between stagnation and robust growth. 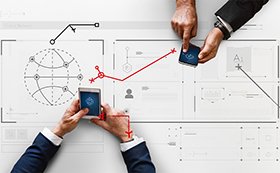 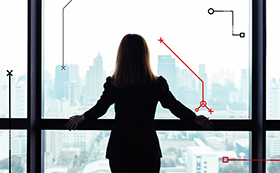