In 2016, the UK’s referendum on membership of the EU presented a binary FX risk to corporates with GBP exposure.  HSBC, and others, forecast before the referendum that GBP-USD would tumble towards 1.25 on a vote to leave the EU, or spike up to the 1.50 area on a vote to remain. The day following the referendum saw GBP-USD’s biggest one-day fall in the post Bretton Woods era. GBP-USD fell from 1.50 at 11pm London time on 23 June to almost 1.32 before 6am on 24 June and the remainder of the year saw volatility at elevated levels.

Some corporates prepared for the referendum by purchasing vanilla options to mitigate their FX risk, avoiding scope for mark-to-market losses associated with forward contracts.  We observed roughly a doubling in the number of transactions of this kind versus an average year.  It was noticeable that such options were predominantly bought by private and smaller corporate businesses. Many large corporates stumbled over either treasury policy limitations or boardroom views that a vote to leave would not happen.

The aftermath revealed that companies were left with significantly different hedging rates for underlying exposures from late 2016 into 2017. Some of those with GBP costs / USD revenues to hedge found themselves with large mark-to-market losses that had filled their credit lines with banks, stopping them from taking advantage of lower spot levels, or, worse still, receiving demands for margin payments where credit terms were more restricted.

With the 29 March 2019 deadline fast approaching, how comparable is the situation to the referendum scenario?  HSBC Global Research has recently updated its forecasts as the political drama unfolds. This is beyond scope of a short-term economic view; it’s a question of what politicians are likely to get consensus agreement upon – if anything.  The HSBC Global Research team sees a decision tree for GBP that now needs to incorporate ‘no deal’ with a forecast drop to 1.10, ‘deal struck with the EU’ with a 1.45 forecast and ‘no Brexit’ with a 1.55 forecast. At the time of writing, they take an equal probability of any of these to arrive at a forecast of 1.37 USD per GBP*. The risk in 2019 is not binary, though the scope for a significant swing one way or another is very real. With the ‘meaningful vote’ earlier this month having delivering a resounding ‘nay’, a path to agreement by the end of March appears less likely. Instead of a specific date or vote, it could be that a more dramatic move in the exchange rate would be prompted by members of Parliament appearing to shift towards backing a particular course of action.

FX markets only started to take much notice of the still wide range of possible outcomes as the deadline approached last autumn, with implied volatility (used to price options) rising rapidly within a month in late 2018. The graph below depicts the implied volatility of GBP-USD options with an expiry in 6 months and struck at-the-money-forward since January 2014: 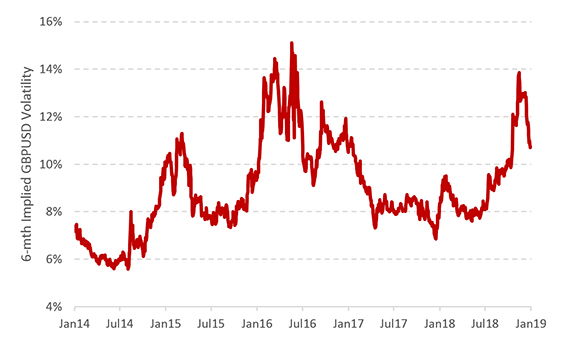 Clearly businesses have been aware to a much wider extent than in 2016, with many corporates now having Brexit committees to consider the key risk factors they face including, but certainly not exclusively focussing on, considering foreign exchange exposures

Broader communication of market conditions may help encourage a culture of more two-way communication between treasury and the business functions to enable a treasurer to gain a more holistic picture of the risks faced.

Some firms have used the memory of 2016, as well as the new friendlier accounting treatment for options under IFRS 9, to permit use of option-based hedging into their treasury policies to add a degree of flexibility, particularly in the event of another significant sudden move. However, the rise in option purchases has not been as acute yet as we saw in 2016, though their use by large corporations is up.

In option markets, the higher recent anxiety of a sharp GBP depreciation on a no-deal Brexit can be observed by the so-called option skew - the difference in pricing of options with strikes to the upside versus the downside of an exchange rate.  The chart below shows the negative skew for 6 month out-of-the-money (25-delta) options. We can observe that it has also increased again to be more negative (i.e. relatively higher cost of protecting against GBP depreciation) in recent months but that the asymmetry hasn’t been anywhere near as acute as it was in 2016.  Skew should not be considered as an indication of directional view, but as a signal as to which side, and to what degree, the market is wary of such a move. I.e. the market is still wary of a significant downside move in GBP-USD, but is less panic than it was a month ago, and certainly than in was in spring 2016. 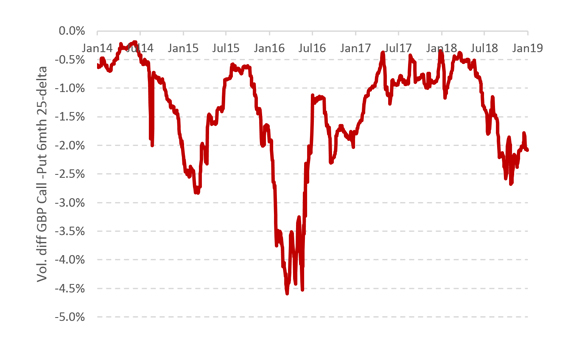 A key point to highlight to risk managers is how quickly moves can occur. A fall of almost 18 cents took place in 6 hours on 24 June 2016 – and well before almost all corporate treasurers in Europe were at their desks.  Irrespective of whether you have a view on whether Britain’s relationship with the EU will be settled by 29 March or not, there’s plenty of scope for significant volatility. It might be the result of one of the UK’s House of Commons votes, a statement from the European Commission or a statement made by a political leader at any time that creates a dramatic shift in expectations. Guessing when that event might come and how the whole Brexit story pans out might be the riskiest of all choices available for FX market participants.

Finally, the choice of hedging instruments to manage your company’s specific exposure profile is wide.  For many, paying an upfront premium for an option presents an unwanted cash out and ‘need to defend’ at the wrong time. For affected companies, option variations and combinations where the cost of flexibility is paid only at expiry or funded by a limited participation in market moves, can be considered to still match cost.

A collection of recently published insights from James Edwards.

View Next
The Quest for the "Optimal Strategy" (Putting Pareto into Practice)
Read the eighth issue of our Rethinking Treasury series.
In Depth
Join the conversation?