Multinational corporates often consider putting net investment hedges (NIH) in place to manage FX risk from foreign operations. Many companies look to optimise currency exposure through their liabilities; either by issuing debt in other currencies or doing so synthetically by swapping debt via a net investment hedge. That said, there may be a new way to look at these hedges thanks to improvements in hedge accounting rules.

Under Generally Accepted Accounting Principles in the United States (US GAAP) and International Financial Reporting Standards (IFRS), foreign subsidiary financials are translated into the parent’s functional currency resulting in adjustments accumulated as a component of equity. While a NIH offsets fluctuations in net asset value within the equity line, ideally, risk managers would like protect the foreign earnings of these subsidiaries. Many cite accounting rules as preventing corporates from accomplishing this goal. In the eyes of the accounting rules, since the foreign subsidiary’s functional currency is the same currency in which they earn revenues, hedge accounting does not apply to this FX risk at the subsidiary – this is where a new perspective may help.

To better illustrate this new perspective, let’s first look at foreign investment generally. Assume you are a USD functional corporate with excess cash available to invest and would like to take advantage of higher yields by purchasing BRL bonds. While the yields may appear attractive, you would obviously consider the potential FX volatility. Accounting rules provide a fairly straightforward way to hedge this, one could use a cross-currency swap and swap the BRL flows (coupons and principal) to USD. Designated as a cash flow hedge, this investment could, over its life, effectively be accounted for as a USD fixed income investment.

Now consider an investment in foreign operations. You would make a capital injection and in return you gain the subsidiary’s earnings. The reason why NIH accounting leaves much to be desired is that while the hedge protects the capital injection from FX exposure (in equity), the accounting does not protect (nor does it contemplate) returns in the income statement.

Under the old rules if a hedger elected the spot method for their NIHs, the impact of FX spot rate movements would flow into equity, however the remaining components of the hedge would be market to market into earnings. If using a cash instrument (i.e. foreign currency debt), the coupons on that debt would accrue into interest expense. However, if using a derivative, i.e. an FX forward, the forward differential (forward points), would be fair valued into earnings, resulting in earnings volatility. Many set their policy to use the forward method for NIH to avoid earnings volatility. New accounting rules allow the forward differential to be “excluded” from the hedge and then be amortised into earnings, thus smoothing the earnings impact. The new hedge accounting rules further expand the treatment of excluded components by allowing cross-currency basis to be systematically recognised into earnings.

A common trade for many US corporates with hedge capacity in lower yielding currencies is to use a NIH to swap USD debt to the lower yielding currency. Auditors have had negative reactions to this type of trade as they feel it is not aligned to what a NIH was intended to do. At the extreme, some view this accounting as structuring earnings results. It may be looked upon as especially aggressive if you set the rates on the swap to maximise the carry. This is where a different perspective can be helpful to a corporate, both to (a) manage their overall FX risk from foreign operations and (b) communicate the true risk management motivations of these trades to internal and external accountants.

To achieve hedge accounting, companies are forced to use rate based instruments to hedge equity investment – in other words you’re trying to hedge the cost of equity capital with fixed income. Thus, it’s impossible to align the hedge with the returns from your foreign operations. However, with the ability to recognise the settlements of a cross-currency swap to earnings as accrued, a hedger could align a cross-currency swap to effectively swap a layer of their foreign earnings into their reporting currency. With this perspective, how should you think about setting the terms of your swap?

You wouldn’t make investments in foreign subsidiaries if your returns were no greater than fixed income. Thus, swapping your functional currency debt to a foreign currency under a NIH model may over time leave your returns “under-hedged”.

Versus the yield of a company's existing bonds, risk managers should consider projected returns that may be at a higher level to better hedge returns on foreign operations 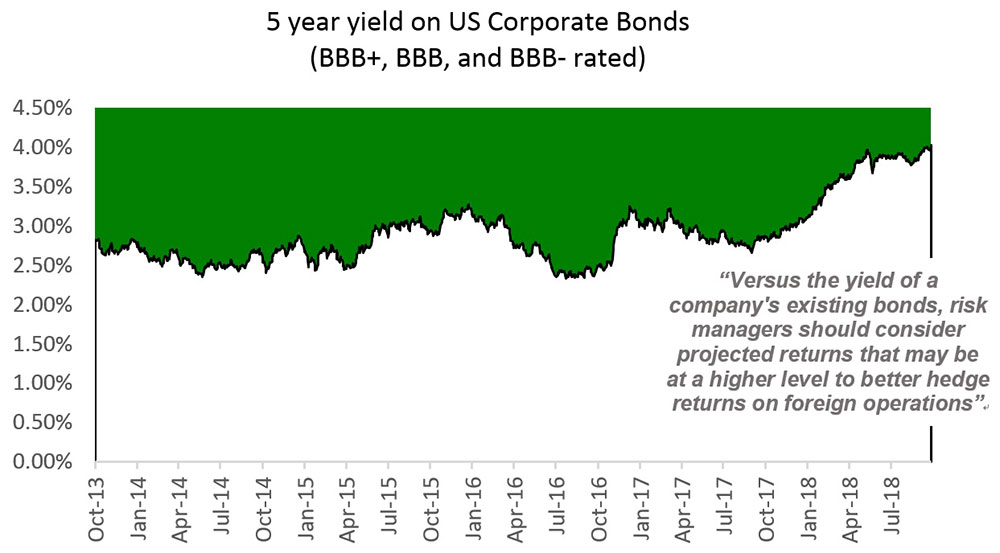 A risk manager should work with the business to understand the projected returns of the foreign operation. Those projections would give the Company an idea of where the optimal swap rate could be set to hedge a portion of foreign return (something expected to be higher than the typical bond yield of the company as shown in the graph above). While accounting practice has developed regarding the use of the par swap rate (fixed rate determined by a company’s market funding curve), setting a zero rate or matching the rate to an outstanding functional currency bond is acceptable; setting the rate to something other than those three is up for debate. Further, you likely have an uphill battle with auditors if you would like to do so. One approach is to analyse the average returns of your foreign subsidiary and look to hedge some layer between your highest bond coupon and that average return. This perspective may go a long way to giving your auditor comfort with the strategy, in other words, you are taking the approach of aligning returns from foreign operations to your NIH.

Accounting changes typically create a heavy burden on corporate finance teams, but this key change in the spot method for hedge accounting creates a great opportunity for corporate risk managers. It may be time to start changing your perspective when it comes to NIH. Don’t merely consider these hedges as a way to optimise currency mix is by simply swapping your bonds to a foreign currency; consider the returns from foreign operations and see how your can better align your hedge to the overall FX risk from foreign subsidiaries.

A collection of recently published insights from Serafin Icasiano.

The contents above may contain certain FASB Accounting standard codification references and/or big four accounting guide references.  HSBC Bank USA (“HSBC”) makes no representation that the accounting references contained herein are exhaustive.  Any example included in this document is for illustrative purpose only and not intended to be exhaustive.  HSBC does not give accounting advice.  You [or each entity] should make your own arrangements in respect of accounting, legal, tax or other specialist advice.

Approved for use in the UK by HSBC Bank plc, 8 Canada Square, London E14 5HQ.
For Professional Clients and Eligible Counterparties only. Not for Retail customers

View Next
Choosing a hedging policy: 2 factors that can cloud our decision making
Read the sixth issue of our Rethinking Treasury series.
In Depth
Join the conversation?