No pain, no gain

Benefits of IFRS 9 well known, less so the costs

A client recently said that anyone who claims to understand IFRS 9 probably hasn’t read it closely enough. With many corporates reaching their first half year reporting under the new rules since IFRS 9’s introduction in January 2018, this statement is beginning to look increasingly true with corporates and auditors alike struggling to interpret the new Standard. That said, under IFRS 9, companies have a choice to continue to apply IAS 39 hedging until the dynamic portfolio management under IFRS 9 is finalised.

Much has already been written about the benefits of IFRS 9 compared to its much unloved predecessor, IAS 39. Key amongst these are the improved treatment of options, increased flexibility in terms of hedging strategies, the ability to overlay hedges on previously hedged positions, simplified hedge effectiveness requirements, hedging components of commodity risk, and changes that allow the recognition of currency basis costs/benefits on a systematic or accrual basis. However, much less has been publicly discussed when it comes to the practical complexities of implementation.

This article briefly highlights some of the most common problem areas that we have seen impacting our corporate clients in relation to the IFRS 9 general hedging model. Whilst these areas are general in nature, the exact details of each individual company’s situation will be critical to understanding the precise issue and the potential path to resolution. As such, these serve as indicators to the broad categories where problems could arise, and are meant as an early warning signal or pointer to where potentially more time may need to be focused.

The removal of the 80-125 percent test was viewed as a big step as it eliminated a major technical source of hedge accounting failure. The introduction of more qualitative criteria was seen as a return to the more principle driven accounting frameworks that existed pre-IAS 39, albeit still with the need to recognise ineffectiveness as it arises.

However, anecdotal evidence would seem to suggest that in situations where the old “critical terms approach” does not apply, many corporates are being asked to provide significant quantitative analysis to explain their decision to apply hedge accounting. In particular, there would appear to be a great deal of focus on potential sources of ineffectiveness and their likely impact on the fair value of a hedging instrument. Some companies are having to provide probability weighted scenario analysis, not just focusing on the sensitivity of hedging instruments to pre-defined movements in market factors, but also to weight these based on the expected volatility and range of movement in those factors themselves, particularly where those factors could lead to ineffectiveness.

The much improved treatment of options under IFRS 9, specifically for changes in time value, have undoubtedly levelled the playing field when compared to linear hedging products. However, some inconsistencies remain, discouraging certain users, whilst at the same time the new guidance could appear insufficient, lacking clarity as to exactly what needs to be done.

Treating time value as a “cost of hedging”, allowing the systematic recognition of changes in it, is viewed as a major improvement over the need to expense this on a mark-to-market basis. However, for companies looking to use options to hedge net investment exposure -  an area where the ability to tailor risk profiles is particularly appealing - the requirement to recognise costs of hedging in the profit and loss account, whilst the exposure they are hedging only impacts Other Comprehensive Income, is considered both frustrating and inconsistent. This is particularly the case when it is still possible to take hedging costs when using linear products to reserves, for example when using the forward method and hedging with an FX forward.

A more technical issue arises when using structured options, mainly barrier type structures where component legs knock in or out. In some situations it is proving difficult to define the exact parameters of the most appropriate “aligned option”. With the aligned option setting the benchmark against which effective changes in both time and intrinsic value are measured, there can be important implications in terms of profit and loss recognition. Lack of both detailed guidance and historical precedence has led to a degree of uncertainty in application which may take some time still to become clear.

The ability to separate changes in value of a currency swap due to currency basis movements, and effectively amortise any currency basis cost/benefit over the life of a hedge, was an important improvement, removing a common and sometimes substantial source of ineffectiveness. For many companies this change has opened up new and efficient sources of funding, allowing them to borrow in foreign currency and swap back into their own at cheaper all-in rates than direct own currency funding.

However, the flip-side to this is increased complexity in terms of accounting due to the need to calculate the value of currency basis and exclude it from the hedge relationship and hence ineffectiveness calculations. This requires a parallel “accounting” valuation be calculated, not using the currency basis curve, to simulate a hypothetical currency basis-free swap. This will need to be repeated at each reporting date to help generate the requisite accounting entries.

Not only is this relatively complex in itself, treasury management systems are also playing catch-up, leading to manual calculations in many cases, reducing efficiency and increasing the risk of errors. Once these calculations are done, not even the accounting entries themselves are straightforward due to the need to allocate changes in swap values to even more different parts of the P&L and Reserves. The example below highlights the high level differences in accounting requirements by comparing a direct, own currency loan, and an economically identical synthetic solution involving a foreign currency loan and cross currency swap. For the same net result in the profit and loss, there are many more accounting entries to be made. 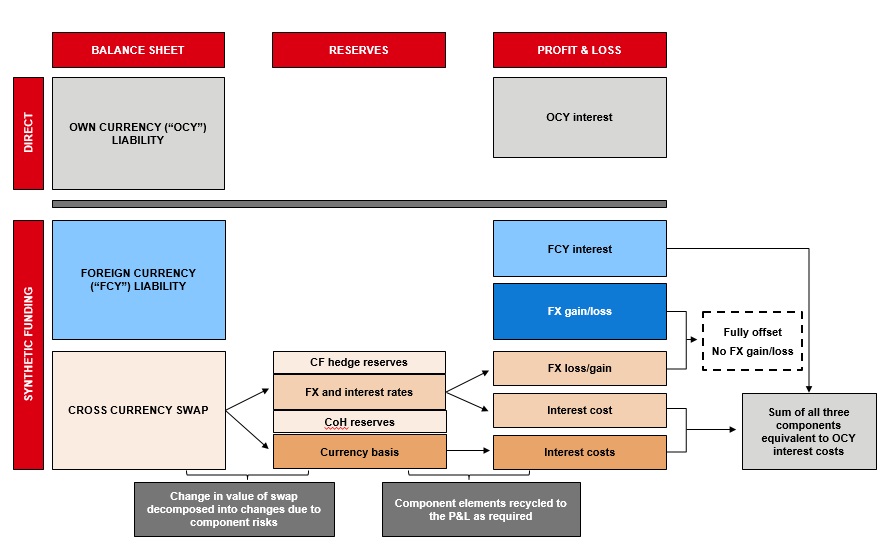 Any new accounting standard will inevitably not be able to comprehensively cover every possible scenario. The process of implementation plays an important part in discovering areas where additional guidance is needed, or judgment calls need to be made. With IFRS 9, the situation is made more complex with somewhat inconsistent application of the previous Standard, particularly across geographies, meaning there is not always a single starting point against which to assess any changes.

With half-year approaching for many first time adopters, and interim accounts due to be published, greater focus will be given to these problem areas, and implementation guidance will start to emerge. Yet, it may take some time to resolve some of the more complex questions, and these may remain unanswered in part or full until the full year end where audited accounts will be published.

A collection of recently published insights from Nik Tandy.

This document is issued by HSBC Bank plc (“HSBC”).  HSBC is a member of the HSBC Group of companies (“HSBC Group”).  Where this document refers to “you” it refers to you or your organisation.

This document is a “financial promotion” within the scope of the rules of the Financial Conduct Authority Issued and approved for publication to Professional Clients and Eligible Counterparties only by HSBC Bank plc.

View Next
Rethinking Treasury - Becoming the CFO’s trusted lieutenant
Approximately 200 CFOs and 300 treasurers share their perspectives on treasury in the HSBC Risk Management survey
In Depth
Join the conversation?