This article is the second of a series called “Rethinking Capital Structure.” In the first article, we demonstrated how it is often difficult and sometimes impossible to stabilise multiple KPIs simultaneously, especially if the company’s currency risk manifests itself differently in different areas of its reported financials.

In this article, we provide an overview of how a few select KPIs vary across sectors and discuss the corresponding approaches to risk management. Note: All charts / pictures in the article are for illustrative purposes only. 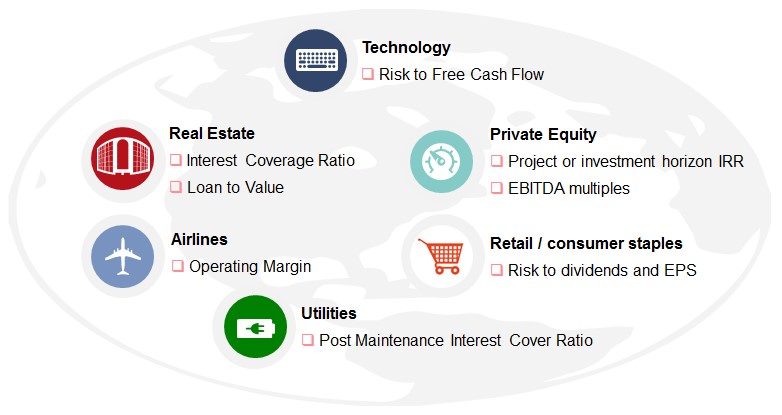 A commonly used metric is the Interest Coverage Ratio (ICR, measured as the ratio of Earnings to Interest Expense), used to gauge the cashflow serviceability of debt, often in sectors that are typically leveraged and/or try and avoid maintaining excess undeployed liquidity, such as Real Estate. Several such companies maintain a high proportion of fixed rate debt in order to minimize the variability of interest expense, thereby increasing the predictability of ICR. A popular concern tends to be around the correlation of earnings with the underlying economy; for example, rental contracts may be linked to inflation, either contractually or through the pricing power of the company or due to prevalent practice in the sector. If revenues are highly correlated with interest rates, maintaining a low proportion of fixed rate debt would result in a more predictable ICR. Quantitatively assessing whether such correlations exist is an essential part of formulating the fixed-floating mix.

In the Utilities space, ICR is sometimes referred to as Post Maintenance Interest Cover Ratio (PMICR). In many parts of the world such as the UK, Utilities are privately owned and are quite leveraged yet rated well within investment grade because the stability of the cashflows allows management to adopt a more aggressive capital structure in order to enhance shareholder value. Maintaining the rating is of utmost importance because this facilitates capital markets access, the conduit to the desired leverage. This means that there is less tolerance for volatility in ICR (or PMICR). It is common knowledge that, in general, Utility bills increase with inflation — several Utilities therefore tend to maintain a low proportion of floating rate debt. In countries such as the UK where there is a regulator-established formulaic linkage to inflation, the companies maintain a high proportion of inflation-linked debt in order to simultaneously reduce risk to the ratio and reduce the near-term interest expense. A seemingly win-win situation! However, the direct inflation-linked debt issuance market is relatively small compared to broader fixed rate issuances. The challenge is often in solving for the right mix of fixed, floating and inflation-linked debt that results in the least risk at the least cost of debt. A seemingly daunting computational problem, which can be addressed by quantifying the impact of a particular debt mix on the probability of breaching trigger levels and cycling through all possible permutations of debt structures. A healthy discussion around market capacity for directly issued and synthetically created debt in these different formats helps set the parameters and guide the analysis.

The practice is also observable in project finance hedging, where the project company often has neither any appetite for FX risk in costs or revenues nor interest rate risk in debt service. These risks are often fully hedged soon after Signing or Financial Close in order to minimize the probability of breaching debt service covenants during the construction and/or operational phases of the project. This is also often in the sponsors’ interest as it increases certainty of cashflows and therefore dividends and ultimately the IRR over the project’s life.

For sectors such as Airlines, the focus is often on managing risk to Operating Margins by suitably hedging fuel prices, as they are a large driver of their costs. Airlines often have well-defined hedging policies and budgets to dynamically increase hedge ratios and durations with changes in levels and the shape of the forward curve. Understanding and monitoring market phenomenon such as Backwardation and Contango play a key role in formulating these policies. One must consider the trend toward using Artificial Intelligence and Machine Learning algorithms to de-construct such phenomena into observable indicators — a topic that is gaining increasing traction with clients globally, as companies turn to leveraging AI to increase the robustness of their risk management frameworks.

For companies that are cash-generative and/or are primarily equity funded, the focus is likely to be more on risk to free cashflow or EPS or dividends. For example, in sectors such as Technology and consumer staples, companies often are unshackled by ICR covenants due to low levels of leverage.

In certain sectors such as Real Estate, the Net Asset Value (NAV, measured as Assets less Net Debt) or Loan-to-Value ratio (LTV) are important since the liquidation value of the company is of importance to lenders, especially if the debt is secured on the assets. For companies with holdings in multiple currencies, this exposes these KPIs to FX translation risk. For example, for a USD-functional real estate company with USD debt and portfolio holdings in multiple regions and currencies, an appreciation in USD versus the currencies in which the assets are held could result in a deterioration in the NAV or LTV, causing concern to lenders and potentially triggering margin increases. A widespread practice is to maintain debt in a currency mix similar to that of the assets. The ‘cost of carry’ manifests itself directly in such cases, with the cost of debt in emerging markets being higher than G10 currencies due to the higher interest rate environment. It is important to quantify and assess the trade-off between risk reduction to NAV and LTV without incurring excessive interest expense as a result.

In some sectors such as Private Equity, sponsors often prefer to match the currency mix of debt to earnings because the exit valuation is often driven by Price/Earnings multiples: Exit proceeds = [P/E multiple] x [Projected Earnings] less Debt repayment.

Therefore, if the currency mix of the debt is not matched to earnings, FX moves could adversely affect the exit proceeds and therefore the realized IRR over the life of the investment.

Another reason companies tend to focus on matching the currency mix of debt to earnings is because the Leverage Ratio (calculated as the ratio of Net Debt to EBITDA) is an important metric for ratings purposes.

A key feature that is common to all the aforementioned approaches to KPI risk management is the optimisation of risk reduction versus the incremental cost of implementation. Using the power of analytics is an essential input towards making an informed decision. Companies often find that their current framework is “inefficient” as they can either reduce risk without impacting costs or vice versa. It is also worth bearing in mind that there are multiple such “efficient” solutions.

In the next article in this series, we will discuss:

An important aspect across sectors and KPIs is being mindful of how peers approach putting in place an appropriate capital structure and risk management framework to get closer to achieving the desired KPI risk profile. This is important in order to ensure that companies do not become outliers vis-à-vis the rest of the peers due to their chosen risk management strategy in the event of large market moves. While we have not addressed this aspect in this article, detailed peer analysis can be used in such cases and will be discussed in greater detail in a later article.

Another aspect of risk management that is glaring by omission is the discussion around optimizing the tenor of the hedges that need to be executed in order to implement a certain risk management strategy. We will re-visit this topic separately in a later article.

A collection of recently published insights from Murari Gattamaneni.

This document is issued by HSBC Bank plc (“HSBC”). HSBC is a member of the HSBC Group of companies (“HSBC Group”). Where this document refers to “you” it refers to you or your organisation.

This document is a “financial promotion” within the scope of the rules of the Financial Conduct Authority Issued and approved for publication to Professional Clients and Eligible Counterparties only by HSBC Bank plc.

View Next
Did you know… An escrow can help mitigate risk in capital market transactions?
Video
Join the conversation?