Read the first issue of our Rethinking Treasury series

This article is part of our New Future series, a compilation of market insights and trends.

In today’s post-crisis economic environment market volatility, liquidity risk and relatively sluggish growth are making it more challenging to implement an effective risk management strategy. To better manage risk in various scenarios, HSBC works with its clients to adopt a strategic hedging programme that strikes a balance between stability and dynamism to reflect changing market conditions. Hedging is crucial, but understanding why that is the case might be even more important to help articulate the decision-making process.

Let’s take a step back and look at how individuals make decisions and how it could have an influence on the decision-making process in the professional sphere. Consider the following two options for your personal benefit only. Which one would you rather choose?

Did you select option B? In fact, research shows that most people have indeed selected option B. The theory of maximising expected value obviously didn’t hold in the real world. A famous behavioural theory (Kahneman and Tversky’s Prospect Theory) explains that people who lose (in this case what is already a guaranteed USD46) suffer more than those who merely fail to gain (in this case the additional USD54). In other words, we are biologically hardwired to be more loss averse than we are gain loving1. A species who prefer the opposite would potentially not have survived to this day.

Investors and shareholders would have similar preference for certainty of outcomes and, accordingly, prize stability over uncertainty. For example, given the same level of profitability, the more stable company would be valued at a premium over the more volatile ones.

Treasurers and/or C-suite face an even more acute version of this kind of utility asymmetry towards gains and losses. Companies are typically evaluated on a year-on-year basis. Any non-operating (ie unproductive) gains are generally viewed as a fluke as they are hardly replicable consistently over time. Gains in one year would create a higher base number which is detrimental for future years’ comparison. Losses, on the other hand, may reflect an inadequate risk management policy, or worse, an inadequate understanding of risks. In the worst case scenario, a large, unforeseen loss that could have been avoided in the first place could potentially result in a strategy change including change within the management and/or treasury team.

More simply put, a rational manager would not risk their career assuming unproductive risks for the company as upsides are not always the end goal but downsides could result in negative consequences.

Based on these points, we see three reasons why companies need to put more focus on hedging.

Reason number 1 – Even if mean reversion was true, it is not a worthwhile strategy

Some treasurers take the quixotic view that markets should mean revert in the long run and conclude that hedging is not necessary.

Mean reversion is the belief that prices and returns will eventually move back toward some market mean or long-term trends, or that the return of a series of repeated exposures over time will eventually average to zero. (We will discuss this more in our future articles.)

It is important to remember that mean reversion already constitutes a judgment call on the market. As with any market calls, it is as likely to be correct as it will be wrong. As any compliance department would warn clients, “Past performance does not guarantee future performance.” What looked like to be a mean level in the past, does not have to hold in the future.

Even if mean reversion was true, according to Prospect Theory, investors would be a lot less impressed about the fluke gains in some years than they would be disappointed with the unnecessary losses in others.

Therefore, it is important to apply this long-term foresight by evening out market noises as much as possible, balancing between the costs of hedging and minimising any potential downsides. There are bound to be foregone gains in some years but also protection in others. However, the resulting stability will be duly rewarded by your investors.

Prospect Theory suggests that companies already facing large losses (most often because of failing to hedge in the first place) tend to become less sensitive about further losses and would become increasingly risk-seeking. In these cases, we notice that such managers are prone to accept a high probability of making things worse in exchange for a small hope of recouping a large loss. Risk taking of this sort can often turn manageable failures into something with a much more dramatic impact.

Psychological hazards of this kind can be hard to fight and are best prevented by a disciplined and robust risk management framework which discourages the culture of ‘taking chances’ and minimises the chance of incurring large losses in the first place.

As companies invest more in data technology, a significant wealth of data is generated and is becoming more accurate and timely than ever before. With better quality data comes higher expectations on the risk managers. Equipped with better information flow, risk managers of today are expected to be able to detect, explain and promptly react to any change in risks appropriately. This is even truer in the case of any large, unforeseen market losses.

Value at Risk (VaR), having long been the most preferred risk measure used by financial institutions, is also gaining traction within the non-financial corporate space.

Emm, Gay and Lin published a paper in 2007 titled Choices and Best Practice in Corporate Risk Management Disclosure and found that companies choosing VaR as a risk disclosure method were mostly the largest companies in their sample as these companies are more likely to have the necessary skills and resources for its implementation.

Companies using VaR are also more likely to understand their risks better as they are able to quantify various risk components and diversification benefits. Such kind of probabilistic insight is only possible with a VaR methodology. They are also more likely to frame the risk problem as broadly as possible and to make hedging decisions that are optimised for the entire portfolio, as opposed to hedging in silos. (This will be further discussed in our future articles.)

It is little wonder, then, that the mere presence of a hedging programme is a good indicator of the risk management philosophy of the company. Treasurers who have invested in developing a sophisticated risk management framework and risk models are encouraged to disclose to the public to promote transparency, instil confidence and generate a positive signalling effect for the company.

Given the complexities of corporate risk management and hedging, the HSBC Thought Leadership has put together a dedicated team of experts to help corporates optimise their portfolio risks and costs.

Next month, we will explore how one of our powerful emotional drivers can affect our decision-making when it comes to hedging, how managers need to be aware of it, and how companies could turn the disadvantage into advantage. 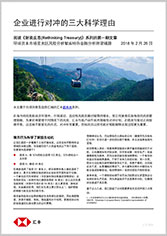 1 Some studies have suggested that losses are twice as powerful, psychologically, as gains. (Tversky and Kahneman, 1992, Advances in prospect theory: Cumulative representation of uncertainty)