The signing of the Tax Cuts and Jobs Act (TCJA) on December 22, 2017 commenced a new era of corporate taxation in the US. The headline was the notable reduction in the corporate tax rate from 35 per cent to 21 per cent, but the law also introduced of a number of new provisions. While the impact is different for each company, determining the interplay of the provisions on investment, capital structure and risk management is a common challenge for many companies, both those headquartered in the US and overseas. One year after the law's enactment, with some technical provisions and corrections still awaited, we review actions companies have taken in response to some of the key changes impacting capital structure and risk management.

We will review this new backdrop and corporate actions in a two-part series. In this edition, we will focus on the flow of cash and uses of cash after the changes in the treatment of US entities' overseas earnings, both historical and future. In next month's newsletter, we will look at the other side of the balance sheet and the impact of tax reform on debt profiles and funding strategies.

TCJA made a wholesale change to the treatment to overseas earnings for US companies by eliminating the tax on repatriated dividends from foreign subsidiaries. To transition to this new regime, TCJA includes a transition tax on the retained earnings since 1986 of foreign affiliates of US companies. This transition tax is payable over 8 years, regardless of the movement of funds, hence creating no prescriptive timeline for repatriation. This contrasts with the repatriation seen in 2005 under the Homeland Investment Act (HIA) where companies could only take advantage of the tax holiday by returning funds to the US. Through the first half of 2018, over USD460 billion of overseas funds have been repatriated, close to four times the total seen in all of 2005. 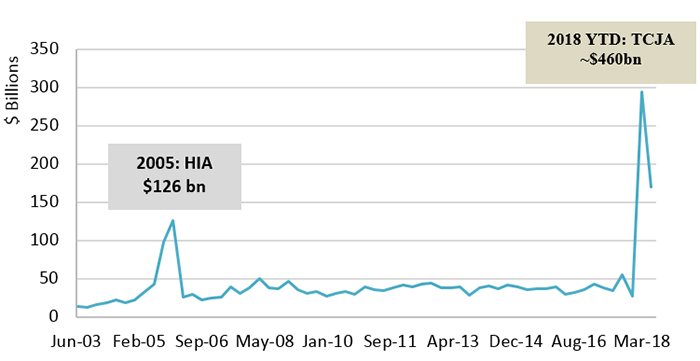 Source: US Department of Commerce, Bloomberg

The elimination of a US corporate tax on dividends received from overseas subsidiaries, first and foremost, makes funds more fungible within a company. Upon the signing of the bill, there was much discussion that there would be significant repatriation of funds that would be used for capital investment within the US. While an increase in capital investment has been seen in 2018, corporates have deployed funds across a broad spectrum of uses, including shareholders (dividends and share buybacks), debt repayment, pension contributions and other corporate purposes.

These are large numbers but they do not equate to the full total of funds held or invested overseas. Part of this can be attributed to staged repatriation plans and uses for the cash overseas, but some cash remains trapped overseas. The change in US corporate taxation did not change the foreign tax treatment and regulation of distributions back to the US, leading to companies finding themselves unable to or it being inefficient to repatriate some funds, China and India are examples of such jurisdictions. Funds considered trapped should be considered in investment strategies, as well as, FX hedging strategies to protect value.

The movement of cash and its various uses has been a frequent headline story for most of 2018. Corporate treasurers have had to adopt risk management strategies to the new tax environment. Many companies have also made funding decisions to adjust to some new provisions within the TCJA, including:

Adjusting capital structure and funding plans in response to the new US corporate tax regime can be a significant exercise for a company with many tax, structural and corporate specific objectives to be balanced. Scenario and simulation analysis can be helpful in stress testing alternative structures. In addition, risk management strategies may need to be adjusted or can even support achieving the objectives related to the desired new post-tax reform profile.

In the next edition of this newsletter, we will review some of the considerations for changing funding profiles following the introduction of these provisions for both US and foreign parent companies.

A collection of recently published insights from Julie K. Bennett