Why do emotions always seem to make us hedge at the worst times?

Read the eleventh article of our Rethinking Treasury series

Last month, we wrote about how hyperbolic discounting causes us to over-value short term pain and over-discount long term gain. We also saw that we can turn hyperbolic discounting on its head by making a "forward-start" decision. For example, in the grocery example, delayed gratification is more likely if the same question was asked 5 months in advance.

Amongst other reasons, we might discount hyperbolically because we are actually very poor forecasters of our emotional states in the future. In cognitive science, these predictions are known as "affective forecasting."

Why we have a hard time predicting our future emotions

To understand why we are poor affective forecasters, just imagine the last time you went to the grocery store to do your weekly shopping.

In this classic example, numerous studies have shown that the amount of food that we buy to be consumed later is influenced by our current state of hunger.

If we have not eaten for several hours, we might think, "Surely I will want several bags of corn chips and a couple of cartons of ice cream next week," failing to adjust for the fact that normally we are not so hungry during the week and may not experience the same cravings. (Wilson & Gilbert, 2003)

Likewise, if we walk into the same store after a 3-hour buffet dinner, we tend to buy less food for our future selves.

In other words, when we are making decisions about the future, we are much more heavily swayed by our current emotional or motivational states than we are aware of. For example, when we are hungry, we think that stuffing our shopping carts with food reflects our general and long-term preferences.

Why we are even worse at predicting social situations

In another famous experiment, it was found that whilst the majority of interviewees said that, when being asked sexually harassing questions, they would refuse to answer or even confront the offensive interviewer, none of them actually do when this happens in actual interviews (Woodzicka & LaFrance, 2001).

However, when people are busy or mentally occupied, people can easily revert back to their "auto-pilot" mode and allow emotions to take control instead.

In other words, people cannot grasp the full complexity of our emotional experience in real settings, nor can we appreciate how much we will actually yield to an authority figure or the power of a social situation.

Why don't we get better in our affective forecasting abilities over time?

In psychology, any persistent bias may be traced back to an evolutionary root.

Broadly speaking, emotions serve to signal about potential danger and opportunities that are present and trigger us into action.

For example, the feeling of hunger prompted our ancestors to hunt and gather more food for their families. Those who tended to over-gather every time they were feeling hungry likely thrived better and passed on their genes, than those who did not.

Future emotions are difficult to predict because humans are hardwired to respond only to the current ones and they are there to inspire our immediate actions.

It is possible to decontaminate this "hot/cold empathy gap" through systematic and logical thinking. However, when people are busy or mentally occupied, people can easily revert back to their "auto-pilot" mode and allow emotions to take control instead.

In calm or benign markets, risk managers are in a "cold" state. Like the grocery shopper already full from dinner, the "cold" risk managers are typically lulled into complacency as they wrongly project their current state into the future. Not surprisingly, complacent risk managers tend to leave more positions unhedged.

"Cold" managers also tend to underestimate how much they can be affected by "peer pressure" when market sentiment, which is a social phenomenon, decidedly turns sour.

When markets turn volatile, risk managers will be in a "hot" state. Like the hungry grocery shopper, "hot" risk managers make more frequent trades, without realising how much their current emotional state was impacting their decision making.

"Hot" managers tend to hedge reactively based on emotions such as fear. These capricious trades, as revealed in hindsight, can often be ill-timed, because markets also tend to overshoot on our collective emotions.

Key Takeaways for CFOs and Treasurers

In this article, we saw how emotions affect our decision making by numbing our ability to empathise with the opposite emotional state.

In order to make objective decisions for the future, it can require a lot of mental effort to adjust for any bias related to our current emotional state.

To de-bias our hedging decisions, a systematic approach to risk management is critical. A first step in this direction might be to set up a treasury policy that defines how hedging decisions should be made in various circumstances.

Another approach we could consider is to seek to diversify our risk positions. By limiting the concentration risk of certain positions or trade sizes, we can potentially reduce any undue influence that emotions might have in the hedging process.

Don't let the "hot/cold empathy gap" pull you into the "law of inverse hedging." This is where emotions lead to successively hedging at the top or hot market scenario and not hedging at the cold or low market scenario. The successive bad outcomes often lead to discontinuing hedging altogether. As suggested, proper policy, analytics and discipline can be just what the doctor ordered to solve this behavioural bias.

Next month, we will launch a new Digital Series where we discuss how we can utilise digital technologies such as machine learning to enhance the decision making capabilities of corporate risk management. 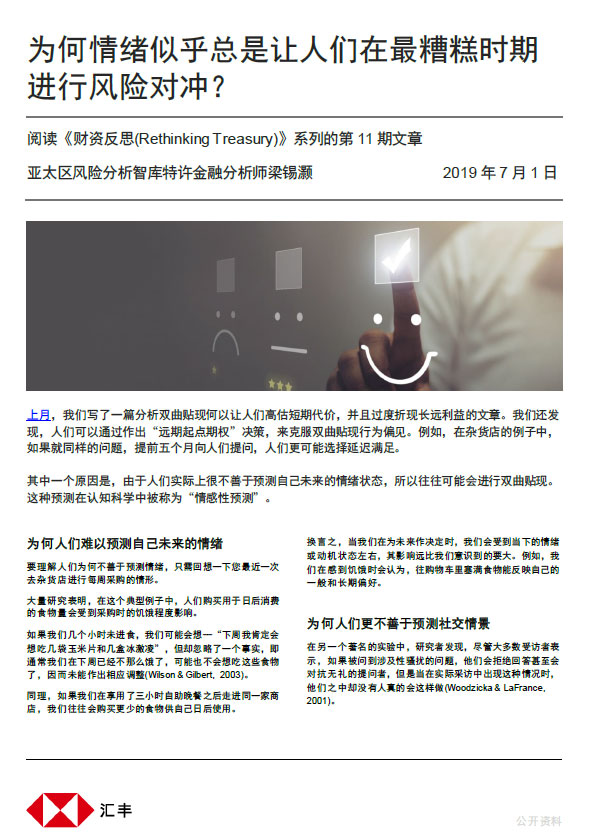 This document is issued by HSBC Bank plc ("HSBC"). HSBC is a member of the HSBC Group of companies ("HSBC Group"). Where this document refers to "you" it refers to you or your organisation.

This document is a "financial promotion" within the scope of the rules of the Financial Conduct Authority Issued and approved for publication to Professional Clients and Eligible Counterparties only by HSBC Bank plc.

View Next
Navigating the IBOR transition
In Depth
Join the conversation?