Head of Advisory and Head of Corporates for Asia Pacific

Despite APAC's economic growth losing some of its momentum in 2018, the region's appetite for M&A (mergers and acquisitions) has accelerated, with deal-making records being broken across Australia, India, Japan and South Korea.1

While the China/US tensions have contributed to slow down outbound investments from China since the second half of 2018, HSBC has recorded a strong start this year in Greater China and South East Asia. "We have continued to increase market share across the region despite overall transaction volumes being down year over year", explains Rajeev Sahney, Head of Advisory and Head of Corporates for Asia Pacific.

Suvir Loomba, Head of Issuer Services, APAC, said a number of factors were driving M&A in the region, including the existence of a healthy venture capital (VC) and private equity market eager to deploy large sums of dry powder. For instance, APAC is one of the few regions in the world where VC activity has remained strong, with more than 5000 transactions completing in 2018 alone, in contrast to the US where deal activity plunged to a five-year low.2 Corporate-led investments into burgeoning technology companies inside Asia were equally robust.3 In addition, Asia Pacific now accounts for 34.1 per cent of the global High Networth Individual (HNWI) population and 30.8 per cent of global HNWI wealth after overtaking North America as the region with most HNWIs4.

We have continued to increase market share across the region despite overall transaction volumes being down year over year.
– Rajeev Sahney, Head of Advisory and Head of Corporates for Asia-Pacific

"We have observed an increasing number of family-owned businesses in APAC looking to move into the mainstream either through a public listing or via consolidation, thus driving M&A flow in the region. Elsewhere, more traditional investors such as sovereign wealth funds and open ended investment companies are looking beyond public markets and allocating directly into private markets as they look to generate better yield in these challenging macro conditions. Many of these investors are building up exposures into private markets through special purpose vehicle (SPV) structures," explains Loomba.

Entrenching cross-border M&A and financing even further has been the China-led Belt and Road Initiative (also known as "One Belt One Road"), considered to be the most ambitious globalisation project ever undertaken and one which is likely to play an integral role in the internationalisation of the RMB.5 The project is expected to involve nearly USD1 trillion being channelled across recipient markets (i.e. covering 70 countries collectively accounting for approximately one third of world GDP) with most of the capital being assigned to infrastructure including ports, roads, railways, airports, power plants and telecoms.6

As M&A inside APAC picks up, escrow agents are playing an increasingly pivotal role in supporting capital markets transactions. Robert Wall, Head of Financial Institutions Group, Hong Kong, says: "We are seeing increasing intra-Asian trades which also drive financial flow in the region. In certain markets, the settlement of M&A transactions is not delivered in real time and a trusted partner is required to act as an intermediary to safeguard both sides of the transaction particularly when they are from different jurisdictions. We have observed an increase in advisory banks looking for partners they can trust to facilitate this safekeeping service."

In certain markets, the settlement of M&A transactions is not delivered in real time and a trusted partner is required to act as an intermediary to safeguard both sides of the transaction particularly when they are from different jurisdictions. We have observed an increase in advisory banks looking for partners they can trust to facilitate this safekeeping service.
– Robert Wall, Head of Financial Institutions Group, Hong Kong

Escrow accounts are straightforward and easy to establish, helping with the closing of transactions – whether it be M&A or financing, across a multitude of different locations, each with their own unique regulatory requirements.

"When you think that Alipay was effectively started as an escrow service to protect Chinese consumers, it is not difficult to understand why clients dealing in unfamiliar geographies are looking to deal with a trusted central counterparty", adds Wall.

Chinese buyouts of European companies increased by 81 per cent in 20187 with Germany (35 deals), the UK (34 deals), Italy (20 deals) and France (16 deals) being among the most popular investment destinations.8

While the US-China trade tariffs have been destabilising, emerging APAC economies appear to be better insulated (in comparison to previous cycles) against the risk of rising US rates.9 This should allow for APAC M&A to continue as it is without being impacted by any Federal Reserve hikes.10 "Geopolitical issues have contributed to a slowdown in growth which, in turn, has increased market volatility and impacted valuations. Modest valuations combined with liquid markets may set the stage for a spur in transaction activity in the second half of 2019," confirms Sahney.

In these complex cross-border transactions, the knowledge and ability to navigate local requirements, is critical. "We are fortunate to have a long-standing expertise in the corporate trust and agency space, with a wide geographical reach which allows us to effectively support international capital market transactions. We have more than 120 dedicated people servicing Asian clients and global clients making acquisitions into Asia," highlights Loomba. As escrow agent, HSBC acts as an independent party to hold assets in custody or certain documents in safekeeping and acts under the instructions of the contracting parties when handling or releasing assets or documents.11 "Usually, clients are also seeking the benefits of our sizeable custody operations, coupled with HSBC's strong balance sheet, to allow the timely move of liquidity intra-day and to help reduce counterparty risks," continues Loomba. He highlights "Our team of transaction managers ensures that the transaction is structured with the best interests of the contracting parties." 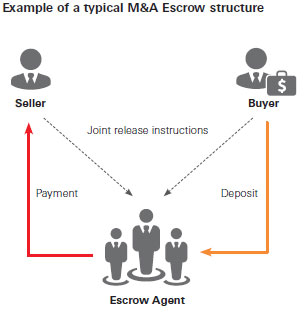 The trustee and agency services space is fast evolving, being reshaped by innovation in technology, new market trends and regulatory changes. For instance, regulatory requirements in some markets such as India and Indonesia require that the governing funds held by providers of e-wallet accounts be stored cash in escrow up until the point at which the money is spent online.

Even though escrow agents have historically been used in M&A, we are seeing them being deployed more regularly in trade finance, construction finance and real estate finance.
– Suvir Loomba, Head of Issuer Services, APAC

The use of escrows has spread to other capital markets areas and can prove pivotal in the delivery of tailored solutions to support clients' financing requirements. 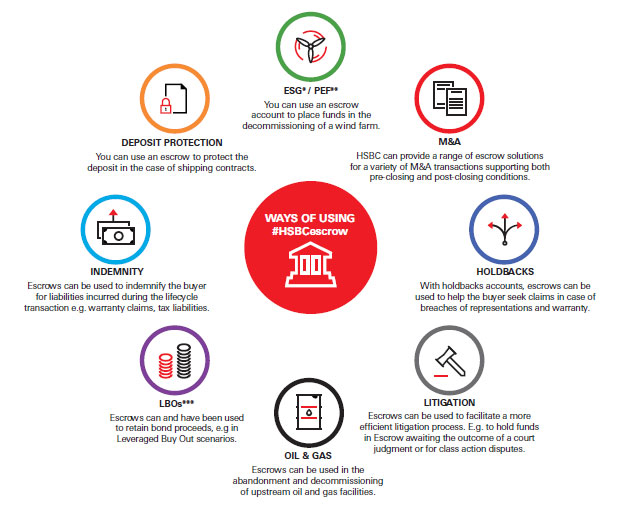 "Even though escrow agents have historically been used in M&A, we are seeing them being deployed more regularly in trade finance, construction finance and real estate finance," confirms Loomba. Holding funds in escrow can help the buyer providing the insurance of payment to the seller while saving the buyer costs and efforts involved in issuing letter of credits or bank guarantees for instance.

To find out more about HSBC Issuer Services:

6European Bank for Reconstruction and Development – Belt and Road Initiative

A collection of recently published insights from Suvir Loomba.

Head of Advisory and Head of Corporates for Asia Pacific

A collection of recently published insights from Rajeev Sahney.

A collection of recently published insights from Robert Wall.

View Next
Seeking Alpha in the A Share Market
Investors looking for alpha returns from China’s onshore stocks need to assess high valuations in new growth industries
In Depth
Join the conversation?