From inclusion to inflows: how Chinese capital markets are maturing

Despite a short-term slowdown, China's economy has long-term potential.

As return opportunities in developed markets become sparser – exacerbated by low interest rates and equity volatility – global investors are starting to increasingly integrate emerging markets into their portfolios. What was once a firmly closed economy, China has incrementally opened up its equity and fixed income markets to foreign institutions. This liberalisation helped persuade leading benchmark providers – most notably MSCI and FTSE Russell – to reclassify the country in their widely-followed indices, in what many anticipated would lead to an infusion of investor capital in China. Experts at the HSBC Securities Services Leadership Forum in Hong Kong shared their insights about China’s ongoing transformation.

China’s growth: cautious on near term outlook, but bullish on long term potential

Qu Hongbin, Co-Head of Asian Economics Research and Chief Economist for Greater China at HSBC, expects China’s GDP growth will decline to below 6 per cent in 2020, an unprecedented low, as a result of multiple headwinds from the global economic slowdown and ongoing US-China trade tensions. With that in mind, Qu expects the government will launch a round of counter measures to soften any hard landing such as through injecting fresh liquidity into the banking system, reducing lending rates and increasing investment in infrastructure initiatives.

Despite near term reservations about the health of China’s economy, Qu is bullish about the country’s mid to long term prospects, pointing to its large supply of STEM (science, technology, engineering, maths) graduate talent. On an annual basis, China graduates more STEM students than that of Europe, the US, Japan and Korea combined. He adds that government plans to sharply increase investment into technology and infrastructure projects, such as 5G, will be pivotal to China’s longer term economic success as well.

Patrick Wong, managing director, head of China sales and business development at HSBC Securities Services, says a number of milestones were reached in China during 2019. “2019 was the year of index inclusions. We saw MSCI tripling its China weighting in its EM Index while FTSE Russell incorporated A shares onto its index too. Furthermore, Bloomberg Barclays added Chinese bonds to its Global Aggregate Index, while J.P. Morgan confirmed it will start phasing in Chinese government debt into its emerging market indices,” he adds.

Although experts had predicted as much as USD600 billion of foreign investor capital would enter China off the back of index inclusions, passive flows have been quite muted, according to Ding Chen, Chief Executive Officer at CSOP. Chen says the lower-than-expected flows are partly because MSCI inclusion only applies to A-shares, of which there are a finite amount. “As the number of shares available increases, so too will passive investments,” she adds. Meanwhile, Amy Cho, Chief Executive Officer, Hong Kong at Schroders, believes active investor interest in China is rising, especially at US institutions who are looking to obtain higher yields from emerging markets.

The reforms drive on

China continues to make it easier for foreigners to invest. For instance, regulators recently lifted investment quotas on the QFII (Qualified Foreign Institutional Investor) and RQFII (Renminbi Qualified Foreign Institutional Investor) schemes. The country has also extended the scope of its Connect programme launching a London-Shanghai Stock Connect in June 2019, which will now permit investors to trade A shares via global depository receipts listed on the London Stock Exchange, and vice versa. Elsewhere, the Sino-Japan ETF (exchange traded fund) Connect is poised to boost cross-border investments by ETFs in both countries.

While the Chinese market has undergone major liberalisation, challenges remain. Ding says the absence of liquidity in the country’s secondary fixed income markets is a recurring problem as is the lack of readily available hedging tools. Moreover, panellists concede that China’s equity market is prone to bouts of volatility as the country’s retail investors – many of whom are short-termist by nature - continue to be a dominant force. “Foreign investors typically apply a much stronger valuation discipline and stick with things they understand. Local investors tend to be more speculative in approach. As foreign ownership increases, the A-share market is showing signs of maturity with its share performance more reflective of the fundamentals and valuation,” comments Cho. 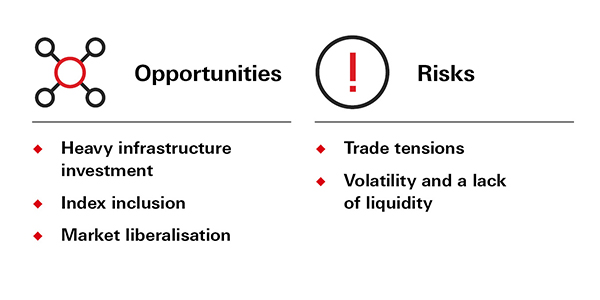 For professional clients and eligible counterparties only.
All information is subject to local regulations.