The European Securitisation market... A year of challenges and opportunities

HSBC Issuer Services' report highlights key evolutions in the European securitisation market which has seen tremendous change and challenges in 2019. Which key trends have shaped the market?

Following up on the paper published in quarter one 2019, Trustee and agency services: An industry bracing for change1 which touched on the European securitisation market as being an industry in recovery mode, HSBC Issuer Services has prepared a follow-up report highlighting the evolutions in the market which has seen tremendous change and challenges in 2019.

"2019 has been a year of change. As our previous paper highlights, it is also a year of 'firsts' for the European securitisation market.

In the first months, not only did we witness the set-up of the Simple, Transparent and Standardised (STS) Securitisation regulation, we also saw the emergence of new sub sectors such as Irish Buy-to-Let RMBS and French Marketplace lending.

Our Issuer Services business has continuously strived to adapt to these trends in two ways: first, by increasingly providing the strategic role of cash manager and second, by investing in innovative digital platforms providing self-services to our clients, including reporting and analytics." – Chris Knowles, Head of Issuer Services, Europe

Which themes have shaped the European securitisation market?

The launch of the 'Simple, Transparent and Standardised' (STS) at the start of 2019 marked an important turning point in the market. However, market participants at the Global Asset Backed Security (ABS) conference in June were said to be fatigued by the level of regulatory and policy requirements placed on both investors and issuers. Delays to approvals in key regulations also contributed to this market feeling.

In spite of this, two third-party verification agents were eventually authorised in March 2019 – the German entity STS Verification International (SVI) and the UK firm Prime Collateralised Securities (PCS). This opened the market up to STS transactions with VCL 28, launched in March 2019, being the first STS compliant transaction.

After a slow start, STS transactions did pick up significantly in Q2. Since late March, 27 STS compliant transactions have been distributed publicly in the primary market totalling EUR19.8 billion and accounting for nearly 42 per cent market share.

The STS market still being in its infancy, and given the perceived benefits of adopting it, it is still to be seen in the coming months whether STS eligible transactions will be compliant.

With LIBOR set to be demised by year end 2021, this year has seen the UK ABS market transition from LIBOR to SONIA as the primary interest rate benchmark. Since the covered bond market started adopting SONIA in the second half of 2018, the UK securitisation market has made great strides in 2019, with the majority of Q2 UK deals referencing SONIA. As with covered bond transactions, these are largely using the convention of daily compounding with a five-day lag.

Since the first publicly distributed SONIA-benchmarked transaction, Silverstone Master Issuer plc Series 2019-1 was launched in April 2019, there has been circa GPB9.6 billion SONIA-linked issuances in the market, accounting for about 51 per cent of the year-to-date UK ABS 2019 market.

2019 has been an exciting year for HSBC Issuer Services. Despite a slow start to the year, issuance levels picked up significantly since Q2. This trend was also reflected in the number of public and private transactions we have closed this year.

The interest rate reform has been slower in the US, with transactions still referencing USD LIBOR as its benchmark, however in Europe, issuers are starting to consider SOFR for its USD denominated notes. In September 2019, Newday 2019-2 (where HSBC Issuer Services acted as Calculation and Principal Paying Agent) became one of the first UK transactions to reference SOFR instead of LIBOR for its USD Class A note.

In the Eurozone, EURIBOR is likely to be reformed rather than replaced – adopting a hybrid methodology to incorporate wider market sources such as panel bank's cost of funds. However, whether EURIBOR remains in existence in the long term is still to be seen.

Are we witnessing signs of a market recovery?

The Securitisation primary market in 2019 can be divided into two distinct phases. Q1 had one of the lowest levels of distributed ABS in the post-crisis era (lowest since 2009). Analysts at S&P put the slow start predominantly down to uncertainties over EU's new 'STS' Securitisation regulation – which came into effect at the start of 2019. In addition, macro concerns are looming over a potential Italian economic crisis. The lack of clarity on the outcome of Brexit negotiations is another factor also likely to have stifled the primary market in the early months of 2019.

Despite the slow start to the year, the market has picked up since Q1. As of 20 September, YTD distributed ABS issuance stands at EUR47.2 billion, although still 12 per cent lower than at the same stage last year. However, Figure 3 demonstrates the gap between 2019 issuance levels versus 2018 continues to narrow as we head towards Q4. This is largely due to strong activity since the start of April. EUR18 billion was distributed to the market in Q2, almost double the EUR9.5 million figure in Q1. Q3 also saw similar issuance levels to Q2, despite much of the European market being on their summer break during August.

However, the securitisation market, and in particular UK RMBS, will likely be cautious over the next few months. If the scenario of a no deal Brexit was to happen, market analysts predict the impact will be felt across asset classes and jurisdictions.

"2019 has been an exciting year for HSBC Issuer Services. Despite a slow start to the year, issuance levels picked up significantly since Q2. This trend was also reflected in the number of public and private transactions we have closed this year.

On the private side, we have closed 13 deals this year which includes a BTL RMBS, a credit card ABS, an Auto Loan and a Consumer ABS." – Arijeet Das, CFA, Client Service Manager, Securitisation specialist, author of the report

Diversification, a driver to a healthy market

The largest subsector this year is French RMBS which has so far issued EUR25 billion (all retained). This is represented by three transactions, FCT Credit Agricole Habitat 2019, BPCE Master Home Loans 2019-1 and 2019-2, the three largest issuances in European securitisation this year. The former was Credit Agricole's first true sale RMBS in France, with the asset pool consisting of individuals benefiting from first mortgage liens on residential properties located in France.

With EUR12.4 billion distributed to the market, July 2019 was the third most prolific month for ABS issuance since the financial crisis in 2008 (figure 4). This was represented by 21 transactions, 8 of which are STS compliant. The month was boosted by issuances being done in a wide range of jurisdictions including Italy, Spain, Ireland, Netherlands and Portugal. 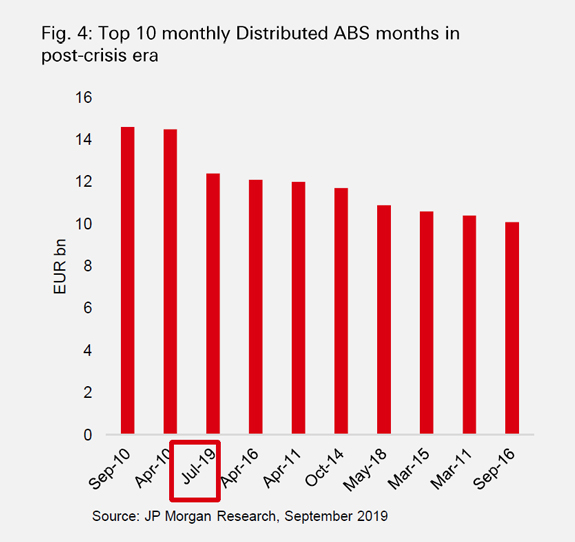 July 2019 has been the third most prolific month for ABS issuance since the financial crisis in 2008 [...] with 21 transactions, eight of which are STS compliant. 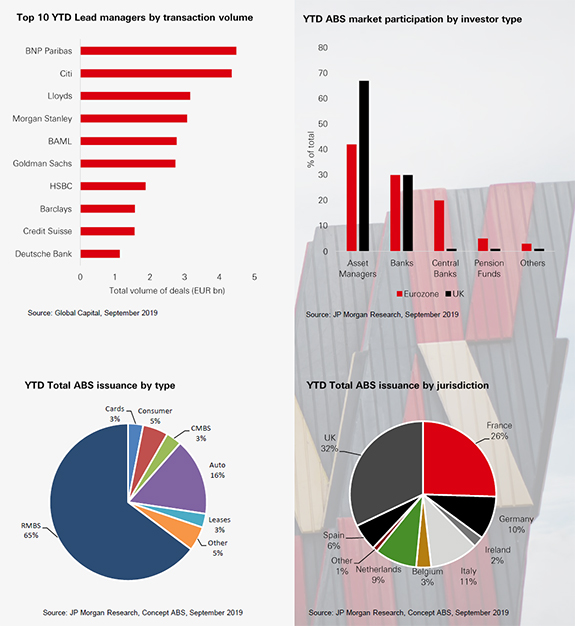 To find out more about HSBC Issuer Services:

A collection of recently published insights from Arijeet Das.

A collection of recently published insights from Chris Knowles.

View Next
ESG as an investment enabler
In Depth
Join the conversation?