From ‘Frontier’ to ‘Emerging’

Kuwait opens up to further investors

It’s a day that many have been working hard for. Despite the myriad challenges presented by the COVID-19 pandemic, Kuwait’s inclusion in the MSCI Emerging Markets index took place on 30 November 2020. This report outlines the steps taken by key stakeholders responsible to set the conditions for such an achievement, and how investors are best-placed to take advantage of one of the most significant market milestones for Kuwait this decade.

On paper, Kuwait enjoys an enviable global economic standing, given the rich resources of oil that deliver a healthy GDP and standard of living for its over 4m inhabitants.

That said, the small but wealthy nation has faced stronger economic headwinds in recent times than its neighbours in the Gulf Cooperation Council (GCC) countries, resulting in significant friction between government and parliament on whether to boost liquidity in its public finances through new debt laws.

With a new Emir now in place since September this year, there is renewed impetus to address the challenges of diversification, oil subsidy cuts and tax reforms that are needed to keep pace with GCC neighbours.

Doing so is by no means an easy task – petroleum still accounts for the majority of Kuwait’s GDP, and over 90 per cent of its exports and government income1. An over-sized public sector and relatively young population makes this rebalancing demographically difficult too.

Therefore, securing significant capital inflow from large private sector players is a priority in realigning the country’s economy and helping Kuwait face the future with confidence.

There is renewed impetus to address the challenges of diversification, oil subsidy cuts and tax reforms

At the heart of Kuwait’s ongoing mission to reform and diversify is its National Vision 2035.

Modelled similarly to those of its peers in other key MENAT markets, the Vision provides a framework for committing to Sustainable Development Goals that largely match those adopted by the UN in 2016 – though individual countries vary the speed and focus depending on their circumstances.

Kuwait’s Vision 2035 ambitions2 cover all aspects of the country’s future wellbeing - from repositioning its global status in trade and culture, to reforming the nation’s infrastructure, education and public sectors to ensure a diverse, healthy economy and sustainable quality of life for its population.

For Kuwait, Vision 2035 is a vital guiding light for reform, given the country’s imperative to restructure and open up further through a more streamlined and dynamic financial market. The Vision was updated in 2017 in a move to reduce the burden on the state to support these farreaching targets, from 90 per cent to 30-40 per cent.3

The balance is to be picked up by private sector participation as part of the wider ‘New Kuwait’ drive, which highlights a solid ambition to realise the country’s future status as a financial and cultural hub within 15 years.

International investor corporations are what Dr Sophie Olver-Ellis describes in her London School of Economics paper in January 20204 as key to “embedding Kuwait into the global economy, attracting 300 per cent more Foreign Direct Investment (FDI) and raising more than 400 million KWD (GBP1.3 billion) from international corporations.”

For the investors, she adds, the specific focus is to attract interest in “strategically important industries such as information and communication technology, renewable energy, electricity and water, tourism, healthcare and education.”

So how has Kuwait been setting the scene in preparation for acquiring Emerging Markets status on the MSCI index?

A number of key events have been pivotal over the past decade in making inclusion happen. Boursa Kuwait, the national exchange operator that took over the Kuwait Stock Exchange in April 2014, helped facilitate the path to technical improvements – such as supporting HSBC’s proposal for speedier account openings for investors. However, it was the establishment of the Capital Markets Authority (CMA) in 2010 with its reforming mandate to engage with Boursa Kuwait and the local CSD Kuwait Clearing Company (KCC) that has prepared it for Emerging Markets status and helped pave the way more comprehensively.

A structure of governance was agreed, and in 2016 the Market Development Project (MD) was initiated.

There was close cooperation with Boursa Kuwait to form a ‘market readiness’ team, and in 2017 the CMA obtained full membership of the International Organisation of Securities Commissions (IOSCO). This was followed by the go-live of MD’s first Phase later in 2017 and inclusion in the Emerging Markets Index by FTSE Russell in two tranches in September and December 2018, and subsequently by S&P Dow Jones in September 2019.

Investors’ concerns over Asset Protection were addressed by the implementation of a Custodian Rejection facility in July 2017, allowing for trade rejections up to 12noon local time at T+2. A KCC-run Financial Collateral System replaced the Settlement Guarantee Fund, requiring custodian and brokers as well as KCC to have collateral in place. Finally, Boursa Kuwait made changes to tick sizes, price limits and closing auction times.

MD Phase 3 split into two stages, with the first being implemented in April 2019.

As well as restructuring the market to reflect changes to bylaws, the first stage changes that participants faced included:

Second-stage developments due to be implemented include:

Some extra market developments outside the MD project remit have been adopted to enhance market flexibility in time for the MSCI upgrade. Crucially, omnibus accounts and same NIN crossing is now allowed for foreign investors. Additionally, an Over-The-Counter (OTC) trading platform was created in 2018 to allow trade in unlisted securities, including unlisted equities, corporate bonds and sukuk.

An Allocation Consolidation Module (ACM) account process went live in early November, allowing local brokers to execute block trades via an ACM account NIN and then allocate the trades to segregated investor accounts. The NIN should be opened by the local broker and custodians will not receive any reporting of the block trades prior to allocation. However, custodians will receive trade activity reporting from the KCC at segregated account level, post trade allocation.

A new settlement mechanism will be applied after inclusion, whereby settlement will be on a net basis. Netting allows flexible settlement on individual and institutional investors. This means that, if an investor executes both purchase and sale trades in the same trading session, they are not required to pay the full value of the purchase transaction, but rather the net amount of the purchase and sale trades. If the sale proceeds amount is higher than the purchase amount, the investor will receive the net amount from the KCC.

MSCI and Kuwait – a deepening relationship

For Kuwait, reaching the milestone of inclusion as an Emerging Market has been the culmination of a long process of consultation with MSCI which began in June 2018. To date, the country has also been very highly weighted on MSCI’s Frontier Markets index.5

Pavlo Taranenko, Executive Director, Index Research at MSCI, explains: “We ran consultations with market participants for a year. The feedback was very positive, both about the market and the Market Development project. There was one specific caveat about omnibus accounts and crossing, where some clients felt they would be more confident if these structural issues were reformed, to help them better access the market. That was quickly addressed by Kuwait - within just two months.”

Kuwait, which is currently the largest frontier market in the MSCI FM and MSCI FM 100 indexes, is likely to have 21 constituents (7 Standard, 14 Small Cap) in the EM index. EM Passive trackers’ buying could lead to net inflows over USD2.7 billion at the time of inclusion. In terms of size, Kuwait (0.58 per cent) could be behind Qatar (0.79 per cent) and Poland (0.70 per cent) and ahead of UAE (0.55 per cent) in MSCI EM.

The journey to MSCI inclusion 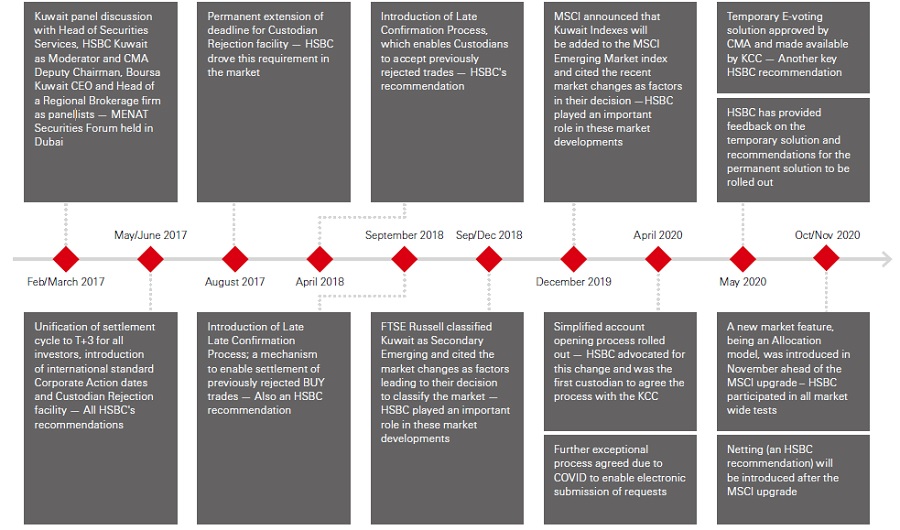 For a small Gulf nation, Kuwait has always been able to punch above its weight. Now, while facing a future that has to embrace sustainability, diverse revenue streams and long-term prosperity for its citizens, the country’s attractiveness to foreign investors is more important than ever.

As a large bank that is based on nurturing relationships, HSBC is committed to supporting our clients through their growth and development. We aim to help them transition seamlessly through market changes, and empower them to thrive.

HSBC has been in Kuwait since 2005. Since then, we’ve been privileged to participate in the market development journey. We have established strong, collaborative relationships with the CMA and other market entities and have been at the forefront of ensuring successful implementation of the market changes. Leveraging our global network, we have become a trusted partner in market consultation processes to provide guidance and recommendations based on best international practice. We are committed to supporting the market in their drive for ongoing improvement.

A collection of recently published insights from Emma Almerzah.

A collection of recently published insights from Frankie Vaz.