The Best of HSBC China Analysis

As the first major economy to overcome the economic impact of the COVID-19 pandemic, China is experiencing an impressive recovery. In the first quarter of 2021, the country’s gross domestic product grew by a record 18.3 per cent - a development that is all the more impressive considering the more downbeat economic environment in the other parts of the world.

Looking to the future, it is important to understand how the recovery will pan out over the rest of the year, and how it will affect longer-term growth drivers that will encourage new forms of economic activity in the coming decade. These issues were all covered by a panel of HSBC analysts speaking at the eighth HSBC China Conference. 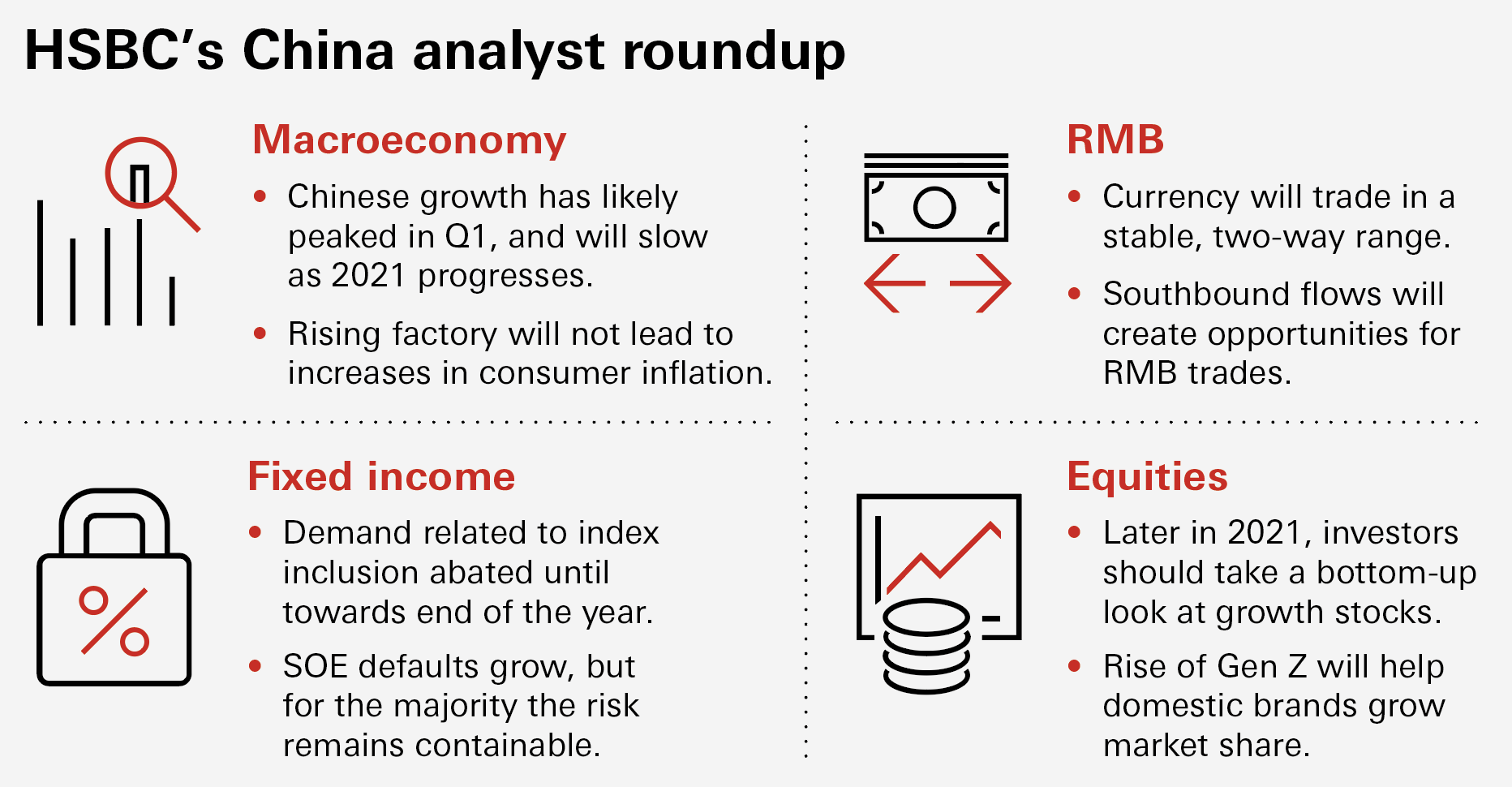 From a broad macro perspective, the economy will continue to recover, but the growth rate will slow down as the year progresses. The extraordinary GDP numbers posted in the first quarter were due to a low base effect from the same period in 2020, with a quarterly growth forecast to slip below 6 per cent at the end of the year.

The recovery will also remain uneven among different parts of the economy, said Hongbin Qu, Co-Head of Asian Economics Research and Chief China Economist, HSBC. “On the production side, services and industrial production have already got back to pre-pandemic growth rates,” he said. “However, on the demand side, for retail sales and private sector investment, there is still some lag, and there will have to be some catch-up in the second half of the year.”

Another macroeconomic factor that is getting a lot of attention is China’s price dynamics. Rising commodity prices have resulted in higher costs for manufacturers. But at the same time, inflation for consumer prices remains muted. “This is because Chinese manufacturers operate in very competitive markets, which makes it hard for them to pass on costs to the consumer without losing market share,” said Mr. Qu. “They will continue to absorb costs and pursue higher productivity via technological improvements.”

An important trend for Chinese financial markets in recent years is the rise of international flows into onshore securities. This is especially true in the bond market, as foreign investors adjust their holdings to reflect the addition of onshore Chinese debt into the major indices they use to benchmark their performance. Although the onshore market is overwhelmingly driven by local investors, the growing presence of foreign capital is evidence that the process of internationalisation is continuing at a steady rate.

That said, a recent dip in foreign holdings of Chinese onshore debt came as a surprise to the market, said Pin Ru Tan, Asia-Pacific Rates Strategist, HSBC. The drop in April, she said, is a sign that most of the investor demand coming from earlier index inclusions has faded. These are the Bloomberg Barclays Global-Aggregate Index (BBGA) and the J.P. Morgan Government Bond Index – Emerging Markets (GBI-EM).

“There will be more index-related flows later in the year when the FTSE World Government Bond Index (WGBI) starts its inclusion process in November,” said Ms Tan. “From now until then, there will likely be more two-way demand”.

International flows will not only be going into China, as there are two upcoming schemes that will likely lead to outflows from mainland China – namely the introduction of a southbound channel to Bond Connect, as well as the launch of Wealth Management Connect.

“Given that Chinese households hold very little overseas assets, we expect pent up demand due to a diversification in investments,” said Ju Wang, Senior FX Strategist, HSBC. She said that a number of opportunities could arise for the renminbi, due to these two liberalisations of the capital account. More broadly, she expects the currency will trade in a stable, albeit two-way range for the rest of 2021.

Although there are more foreign investors buying Chinese debt, there are still lingering concerns within the international investment community – namely, the quality of domestic ratings, the availability of liquidity, and the rise in defaults. All of these factors are moving in the right direction, as the market becomes more open to foreign capital, said Helen Huang, Head of China Onshore Credit Research, HSBC.

Focusing on defaults, she highlighted that these are relatively new events in China, with the first taking place in 2014. This was largely a symbolic event however, as defaults only started to appear regularly in 2018 – first in the private sector, with state-owned companies under increasing pressure to repay their debts. There is uncertainty over whether an implicit state guarantee for SOE debt could be removed, as more of these companies default.

“This is not a black or white issue,” said Ms. Huang. “It is true that some SOEs defaulted, but that does not mean that government support for the state sector has been taken away all together. The majority of SOEs remain a containable risk.”

Moving onto stocks, HSBC downgraded the A-share market in the summer of 2020 from Overweight to Neutral, and since then the market has largely traded on the side lines. The market was no longer cheap, and there are increased regulations in key sectors such as technology and FinTech, while the ongoing Sino-US tensions weighs on sentiment. As the year progresses, investors should take a bottom-up look at growth stocks, said Steven Sun, Head of Research, HSBC Qianhai Securities.

He also talked about the key theme of domestic brands growing market share. This is partly due to the rise of Generation Z – those born after 1995. They may only account for 20 per cent of the population, he said, but they account for as much as 40 per cent of total spending. Their growing national pride gives them a preference for domestic brands over foreign competitors.

Finally, there are general improvements in the Chinese corporate sector. “Chinese companies are becoming more competitive, due to better use of technology and faster product cycles than their western peers,” he said.

View Next
HSBC awarded three top Corporate Trust accolades
HSBC was granted three prestigious recognitions for its Corporate Trust offering by Asia-focused publication The Asset as part of its Triple A Asset Servicing Providers 2021 awards.
In Brief
Join the conversation?