Doing business at the frontier of Asia – Bangladesh and Vietnam

Young populations and competitive wages make Bangladesh and Vietnam attractive destinations for FDI, while the governments are working hard to promote more inwards flows of capital.

One of the most important stories of our times is the shift in economic gravity towards Asia. China, the world’s second largest economy, is at the centre of this development, as it is a key link in many global supply chains. But at the other end of the regional spectrum, there are smaller economies that are taking advantage of the evolving international environment to capture trade and investment opportunities. In Asia, Bangladesh and Vietnam are the frontier markets that exemplify this trend.

Both of these countries have large and relatively young populations, which translates into a significant pool of labour that business can put to work. They also benefit from geographical advantages. Bangladesh is located between China and India, the world’s most populous countries, and it also touches the edge of ASEAN. Vietnam on the other hand has a long coastline that exposes it to the East Asian trade corridor.

In addition to their intrinsic merits, Bangladesh and Vietnam also benefit from developments in other parts of Asia – most notably, China’s move up the value chain. Continuous wage increases and a more valuable Renminbi have combined to make manufacturing in China a much more expensive proposition than it was a decade ago. And although China remains a centre of excellence in many value-add industries, there are some sectors where it is no longer as competitive as it used to be. This includes garment manufacturing, creating opportunities for countries like Bangladesh and Vietnam, which are very experienced in producing clothing.

There are a variety of reasons that business chose to invest in Vietnam. “You have a stable political system, inflation remains under control, and the currency has stayed within a range for a significant period of time,” said Tim Evans, CEO, Vietnam, HSBC. “Vietnam’s brand was good before the pandemic, but its successful handling of the disease will likely enhance it.”

He also points to the country’s policy of opening up to the rest of the world. It already has 14 Free Trade Agreement – most notably, it recently approved an FTA with the EU, which will over time reduce tariffs and other regulatory barriers. A similar deal with the UK could be signed next year, he said.

“At the top level of government, the messages around investment remain positive,” he said. “There can be challenges at the execution level. I have positive stories where people have been surprised at how easily they have been able to get all their paperwork done. And on the flip side I also have stories, where it has been an onerous process.”

Difficulties in execution are not enough to dissuade businesses from entering Vietnam. The COVID-19 pandemic however has created some economic speedbumps, even though the country has received praise for its control of the virus. A fall in global demand has led to exporter having orders cancelled. And although there is still demand among foreign businesses to invest in Vietnam, companies are hesitant to commit money while the borders remain closed.

Some of the dynamics present in Vietnam are also evident in Bangladesh. Although it has yet to complete a FTA, there a currently a number of agreements that are being negotiated with several countries, and China is already taking 97 per cent of Bangladeshi exports without tariffs1 even though an FTA has yet to be signed.

Bangladesh is the second largest garments manufacturer in the world, accounting for 89 per cent of the country’s total exports2. The textiles industry has given Bangladesh an important position in the global fashion supply chain. But as the economy develops, it is clear that there are a wider range of opportunities available, said Mahbub Ur Rahman, HSBC’s CEO in Bangladesh, as foreign businesses look to tap the market of domestic consumers.

“We are seeing interest from industries as varied as healthcare all the way to automobiles,” he said. “The large population and growing purchasing power is making the country attractive for international companies to manufacture products locally to capture the growing domestic demand. Government of Bangladesh is working to have appropriate policies for more complex manufacturing industries like two-wheelers/four-wheelers to flourish. In addition to capturing the local market, the export potential is also immense.” 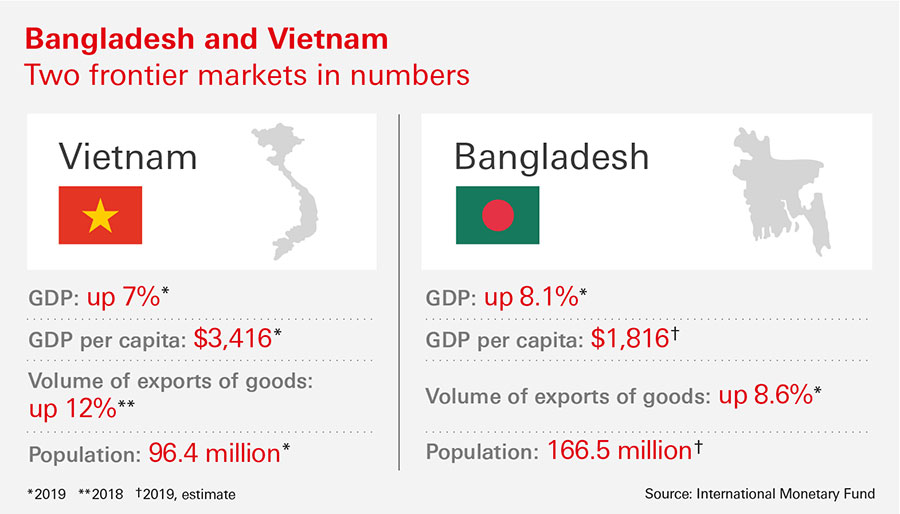 In both countries, there is a strong desire to keep the economic momentum going, which means maintaining an attractive environment for further foreign investment and removing bottlenecks that could impede development.

“The government in Vietnam is acutely aware that it has challenges around people, resources and infrastructure if Foreign Direct Investment rates continue to rise,” said Mr. Evans. If only a small amount of China’s manufacturing transfers to Vietnam it could create significant pressure on everything from workers to roads and ports. If demand for workers increases for example, so too will wages, and could gradually diminish Vietnam’s labour cost competitive advantage.

Mr. Evans said that Vietnam is striking a balance between accepting investment in low value-add industries where it already strong, such as furniture or shoes, but also laying the foundations for the economy to move up the value chain. To get more involved in manufacturing things like electronic and white goods, Vietnam is investing heavily in education. And to ensure the local ports can keep up with demand for trade-related transportation requirements, there are plans in place to develop the necessary infrastructure.

In Bangladesh, there are a large number of Economic Zones in place to encourage economic development, by diversifying the range of export industries in the country. Of the 88 zones approved, 59 will belong to the government and 29 will be privately held3. Some of these will be dedicated to servicing business from certain countries – such as China, India and Japan.

“There are significant work going to develop these economic zones in an expeditious manner,” said Mr. Rahman, “and private companies are being offered incentives like preferential taxes, faster implementation support etc.”