India is moving up a gear in the global bond markets as companies look offshore and investors embrace high-quality and sustainable assets.

The following article is published in collaboration with IFR Asia.

If the first half of 2021 has been good for Asia’s international bond markets, it has been incredible for India.

Indian companies have ramped up international bond issuance so far this year, with G3 bond offerings up 62 per cent over the same period in 2020. It is emerging as Asia’s fastest-growing major market: offshore issuance from China is up just 5 per cent in the same period and supply from ASEAN countries has shrunk by 2 per cent, according to IFR data.

In part these figures reflect pent-up demand from Indian borrowers, as a correction in credit spreads means attractive funding terms are now back on the table after a turbulent 2020. But it is also a sign of growing appetite for Indian exposure among international investors.

On top of that fundamental appeal, offshore Indian bonds offer something that is hard to come by in Asian credit – a non-correlated alternative to China.

“We find credit quality of Indian issuers significantly better versus names from the rest of Asia,” said Sharma. “It also helps us avoid concentration risks versus the benchmark, which has a significant component of Chinese credit in it.”

Indian companies are also seeing the benefits of looking overseas. As well as diversification beyond the local bank market, international funding offers access to rock-bottom global interest rates and a chance for some issuers to promote their sustainability credentials.

“There are multiple motivations for Indian companies to access the debt capital market,” said Vinod Venkatesh, Head of Debt Capital Markets, India, HSBC. “For some it is cost reduction, for some it is to replace amortizing bank loans with more back-ended, bullet-style debt, but one common motivation is the desire to establish a viable, alternative source of financing to conventional bank loans.”

Regulators are playing a part, too. Since the 2019-2020 financial year, all major Indian companies must raise at least 25 per cent of their incremental borrowing in any financial year through onshore bonds, part of a broader agenda to relieve the pressure on India’s overstretched banking system.

As Indian companies warm to the idea of bond funding, the offshore market is becoming increasingly popular. While rupee bond issuance is down 53 per cent this year to date, eight companies have made their offshore debuts, including IT giant Wipro with a USD750 million five-year issue on June 16. 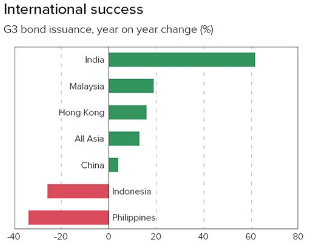 This had, until recently, limited offshore access to only the biggest Indian companies – major banks, public sector enterprises and large household names.

However, a combination of continued economic growth, overseas expansion and increased international appetite has now allowed a broad spectrum of Indian companies to access the international bond market.

Venkatesh at HSBC believes Indian credit has now reached critical mass, with over 60 corporations and institutions able to access the international bond market over the last 5-6 years and a growing number of first-time borrowers.

“HSBC has been involved in a record number of ground-breaking transactions from India this year,” said Venkatesh. “The key theme which has emerged from these issuances is the diversity of issuers across sectors and across rating levels who have accessed the market. We expect this trend to continue and think we will see a sharp increase in both the number of issuers and the volume of deals over the next few years.”

“We have large capital requirements and traditionally we have found only finite capital resources in the onshore debt market,” said Vaswani.

“With ESG bonds we have a bigger set of investors who are targeting that type of issuance, so we have lower cost from green financing,” said Vaswani.

Certain industries are an obvious fit for ESG bonds – such as the renewable energy sector and non-bank lenders focusing on small businesses or affordable housing – but investors are also receptive to carbon-intensive industries with a clear sustainability agenda.

Earlier this year, HSBC was a joint bookrunner on India’s first sustainability-linked bond for Ultratech Cement, which was well received by both conventional global institutional investors and ESG-focused investors.

Of the 16 international bonds HSBC has arranged for Indian issuers this year, eight were ESG labelled – either green, social or sustainability-linked. “We are seeing the so-called ‘greenium’ playing out in the form of perceptibly stronger bookbuilds, tighter pricing compressions and better secondary market performance for ESG labelled trades, meaning these trades are now not just delivering strong messaging value to these issuers but also real economic value,” said Venkatesh. “We expect this theme to continue gathering momentum in India.”

With sustainability and diversity in the driving seat for global investors, Indian bonds are set to stay in the fast lane for the second half of the year – and beyond.

A collection of recently published insights from Paolo Danese.

For professional clients and eligible counterparties.

All information is subject to local regulations.

View Next
Repacks revival: an alternative yield opportunity for investors
HSBC experts discuss the drivers behind the revival of the repacks market and outline the importance of efficient trust and agency solutions to service this booming market.
In Depth
Join the conversation?