After Korea earned a AA rating back in 2012, its highest rated credits opened the path to a global and diversified investor base for Korean issuers.

The following article is published in collaboration with IFR Asia.

That sovereign upgrade, driven by the strength of Korea's solid economy, ushered in a transition stage that still sees Korean issuers, especially top rated ones such as Sovereign, Supranational and Agency Bonds (SSAs), being able to tap investors from both the developed and emerging markets portfolios.

For example, Export-Import Bank of Korea (KEXIM) allocated around 5 per cent of its US dollar bond issue in early 2012 to governments and central banks, but that had grown to around 35 per cent in 2016, and almost 50 per cent in September 2020’s US dollar offering, according to IFR data. 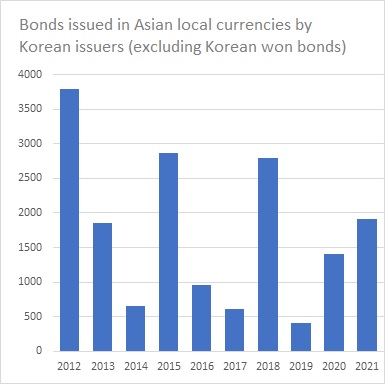 "That advantage also applies to lower rated credits from the same country, given that once a wider share of global SSA investors has opened the door to the likes of Korean policy banks, quasi-sovereign corporates can be next in seeking to tap the same pool of capital," said Shinyung Kang, Head of Debt Capital Markets for Korea at HSBC.

Taeyung Lim, Director, Treasury Group, KEXIM, agreed with the assessment, noting what he called a "spill over effect" from higher rated Korean credits.

"Those SSA investors started out buying KEXIM, and once familiar with us and Korean credits more generally, they start buying down the credit profile and into Single A names, for example," Lim said.

Part of Korea's appeal is also down to issuers' desire to interact with global investors directly, and meet more stringent demands for disclosure and transparency. KEXIM first issued a green bond back in 2013, but this year, amid increasing disclosure requirements from ESG investors looking to protect themselves from potential “greenwashing”, KEXIM launched a special task force to further strengthen its ESG governance and institutions. The result was a newly established ESG unit and an ESG committee at the management level.

"For upcoming ESG transactions we are ready to come back to the market in even better shape," said Lim. "In the past, we just focused on the framework in itself, on how the proceeds of the bond are used. This year we took the step to bake the ESG mission in our strategy and annual plan. "

The abundance of US dollar liquidity has also helped Korean issuers. US dollar issuance is up 66 per cent from last year to US$26.4bn, according to HSBC data. Despite the surge, the need for government reporting prior to offshore issuance has meant that deals are still coming in an overall disciplined fashion, whether from repeat issuers or debut names.

One driver of rising foreign currency issuance, not just in dollars, is the tide of protectionism. Incentives for local production have resulted in Korean manufacturers establishing more plants overseas, with the associated foreign capital needs. The combination of stricter trade policies and low interest rates mean that Korean corporates finance in the international market for their overseas sites.

"HSBC has been a natural partner for many such issuers considering its long-term relationship with clients, long-term services in many markets, and its strong leadership segments such as debt capital markets and ESG through well-established platform in Asia, US and Europe," HSBC's Kang added.

High-rated Korean names like KEXIM now have a more globalised investor base even on dollar deals.

"In 2010, US investors used to be the main supporters, taking up 40 per cent of the order book, now they take only around 15 per cent," said KEXIM's Lim. "In a recent transaction by a Korean bank, US investors were only 5 per cent."

"As we are already well received as an SSA issuer in the market, we want to explore our appeal for bank treasuries and their asset and liability management and balance sheet management books," Lim noted.

Korean issuers are also trailblazing in their local currency diversification efforts, led by issuers like KEXIM, which has issued in 29 currencies worldwide.

As a result, while the share of dollar funding approached 90 per cent around 2016, it has fallen now to around 60 per cent. The euro was the most popular of the other currencies, reaching 27 per cent of all deals, followed by the Australian dollar and Swiss franc with 18 per cent and 17 per cent, respectively.

In 2020, as the world reeled from the impact of the Covid-19 pandemic, international markets froze up, but Korean issuers were ready. KEXIM, for example, was able to place trades in Hong Kong dollars, Brazilian real, and South African rand, often tailoring deal sizes in ways that the international markets do not allow.

As the sovereign approaches its first decade in the Double A club, backed by solid economic fundamentals, there is certainly reason to celebrate.