Calculation and drivers of the Credit Valuation Adjustment for Corporate Treasurers

In this article, we explore in further detail the methodology behind CVA calculation and identify some key drivers of CVA.

In the previous article in the series, we explained how the financial crisis of 2008 led to significant reform in derivative pricing, with adjustments relating to discounting, funding and credit growing in importance. We also took a first look at Credit Valuation Adjustments (CVA), which reflect the likelihood of counterparty default in derivative contracts and portfolios. We outlined why CVA makes the comparison of the "true" fair value of derivatives pricing on multidealer platforms difficult. Finally we introduced Credit Default Swaps (CDS) as traded instruments to hedge against default risk, and therefore as a market observable price for counterparty risk. The important question, though, is how does this translate into pricing impact?

The components of CVA

When a counterparty defaults, the loss to creditors is not necessarily the full exposure as some portion might be recovered from the defaulting counterparty. The size of the recovered exposure relative to the total exposure is referred to as the Recovery Rate. The balance is the amount expected to be lost in case of default, and this is referred to as the Loss Given Default (LGD). As CDS contracts only compensate protection buyers for the LGD rather than the notional exposure of the CDS contract, this is an important factor when interpreting the CDS.

The exposure to a derivatives counterparty can vary significantly over the life of a transaction, with the nature of the derivative product being an important factor in understanding how much exposure is potentially at risk should the counterparty default. Therefore, it is those exposures that hold a positive mark-to-market (MTM) that are relevant (that is, where the derivative counterparty has an obligation to the corporate at the time of default). It is for this reason that for CVA the expected positive exposure needs to be calculated. It can be thought of as a probability weighted average of all possible derivative valuations at a point in time, where negative valuations are treated as zero (as there is no obligation due from the bank counterparty for the scenarios where the derivative has a negative MTM to the corporate). 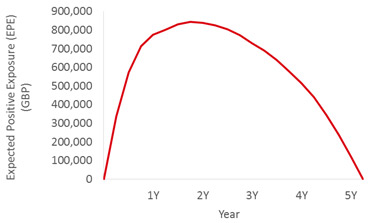 Bringing all components together – calculating CVA

Combining the EPE of the derivative with the PD profile of the counterparty and the LGD allows the CVA of the trade to be calculated. An approach to calculating CVA is shown as

As can be seen from the formula, each of the components described above acts as a driver of CVA. As would be expected, a higher EPE increases CVA, particularly for trades with an EPE profile that remains high until trade maturity, similar to that of the cross currency swap in Figure 1. Intuitively, a higher LGD and a higher PD both increase CVA, and so higher CDS spreads (where a standardised LGD is assumed the same for each bank counterparty) also indicate higher CVA. Finally, in most cases increasing the trade tenor would lead to an increase in CVA.

For comparison, as of 1st March 2019, the 5y CDS of major bank counterparties on the Bloomberg BANK CDS page ranged from 30bp to 153bp.

The example shows that the CVA impact for Interest Rate Swaps is significant enough to warrant further consideration for the corporate treasurer, in particular regarding the economics of counterparty selection in view of the "true" fair value of derivatives. In fact, for trades with a higher share of cash flows at maturity such as Cross Currency Swaps, the impact of CVA is even greater than the IRS shown here. This is due to the more punitive EPE profile typically produced by these products. In the next and final article in the series, we further examine the pricing impact on different product types and illustrate the impact of trade tenor across a range of counterparty creditworthiness. Finally, we also consider the consequences of the pricing impact of CVA from an accounting perspective, in particular focussing on the impact on the corporate balance sheet and income statement.

This document is issued by HSBC Bank plc ("HSBC"). HSBC is a member of the HSBC Group of companies ("HSBC Group"). Where this document refers to "you" it refers to you or your organisation.

This document is a "financial promotion" within the scope of the rules of the Financial Conduct Authority Issued and approved for publication to Professional Clients and Eligible Counterparties only by HSBC Bank plc.