When it comes to buying and selling foreign currency, companies want to seek out the best possible execution prices. They can achieve this by combining a number of liquidity providers (LPs) into what is known as an ‘aggregator’ (which is somewhat similar to looking for house insurance on a website and aggregating all available providers instead of considering just one). This should in principle lead to improved liquidity, a narrower spread (i.e. the difference between buy and sell prices, usually referred to as bid and ask) and, therefore, a better price.

In FX, however, a larger number of LPs does not always lead to a reduction in execution costs, due to various specificities of the market, such as ‘last look’ (i.e. when LPs have the final say on whether to accept or reject the order within a set period of time) and the recycling of liquidity (i.e. when LP A uses prices supplied by LP B in an attempt to profit from widening their spread, without supplying additional liquidity of its own). Hence, the question of which LPs should make up an aggregator ought to be one of quality over quantity, with the typical criteria to consider being: spread, fill ratio, costs of rejections, last look hold time and market impact.

We argue that an additional metric, namely ‘correlation in liquidity’, is useful for determining whether an LP should be part of an aggregator. In particular, by minimising the average correlation between LPs’ mid prices (i.e. the midpoint between bid and ask), companies can diversify their liquidity, in a similar manner to diversifying risk of a portfolio by including uncorrelated assets, and achieve, with a smaller number of LPs, a narrower inside spread (i.e. the average difference between minimum ask and maximum bid, available in an aggregator at the same time).

Our analysis of mid prices for G7 currency pairs from 11 venues shows that including LPs with the smallest average correlation into an aggregator one after another, leads to a faster reduction in the inside spread than when they are added randomly. 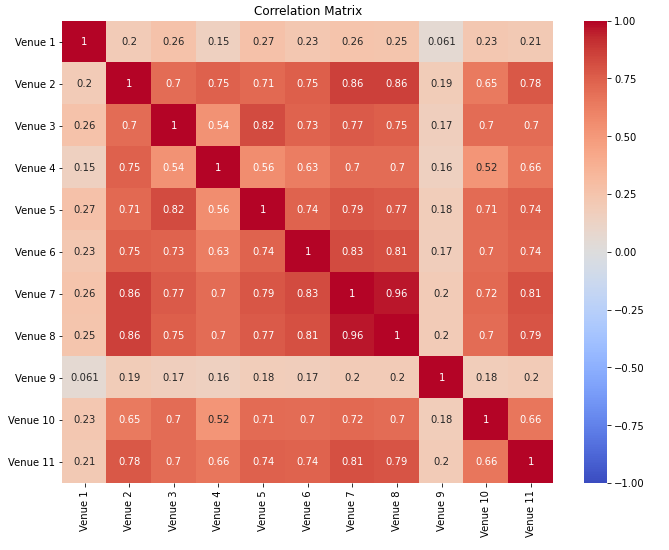 Figure 1. Venues 1 and 9 have a small average correlation and therefore should be included into an aggregator early on, unlike Venue 7, which should be excluded.

Significantly, the rate of decrease of the inside spread levels out as the number of LPs in an aggregator increases, implying that including more LPs with correlated mid prices does not always lead to an improvement in the quality of liquidity (see Figures 1 and 2).

Figure 2. We iteratively included venues sorted according to their average correlation with venues already in the aggregator. To isolate the impact of correlation, the spreads across all venues were aritifically set to be constant.

The following process could be beneficial when selecting LPs to include in an aggregator:

Our analysis suggests that aggregating a limited number of well-chosen LPs can be sufficient for achieving liquidity of high quality. In particular, onboarding LPs with a small mid price correlation and the removal of the most correlated ones from the aggregator could potentially lead to a tighter inside spread, while reducing exposure to liquidity recycling.

A collection of recently published insights from Paris Pennesi.

A collection of recently published insights from Anna Senkevich.

This document is intended for Professional Clients and Eligible Counterparties clients of HSBC Bank Plc and EEA entities or local equivalents to the extent this document is distributed to clients located in non-Mifid jurisdictions. Please refer to the disclaimer relevant to your region. This material is intended for your sole use and is not for general distribution; you may not distribute it further without the consent of HSBC. This material is for informational purposes only and does not constitute an offer or commitment, a solicitation of an offer or commitment to enter into or conclude any transaction or to purchase or sell any financial instrument. This document has been produced by a member of the Sales and Trading Department of HSBC Bank Plc and/ or its affiliates, collectively known as (“HSBC”) and not by HSBC’s Research Department, and does not constitute investment advice. Investors must make their own determination & investment decisions. You are solely responsible for making your own independent appraisal of and investigations into the topics referred to in this document and you should not rely on any information in this document as constituting investment advice. Neither HSBC nor any of its affiliates are responsible for providing you with legal, tax or other specialist advice and you should make your own arrangements in respect of this accordingly. Figures included in this material may relate to past performance or simulated past performance (together “past performance”). Past performance is not a reliable indicator of future performance. Neither HSBC, nor any of its officers, directors, employees or agents accepts any liability for any loss or damage arising out of the use of all or part of this material. This document is intended to be distributed in its entirety. Reproduction of this document, in whole or in part, or disclosure of any of its contents, without prior consent of HSBC or any associate, is prohibited.

View Next
China opens its doors
The opportunities for foreign insurers
In Depth
Join the conversation?